NATOâs strategic redirection to the South 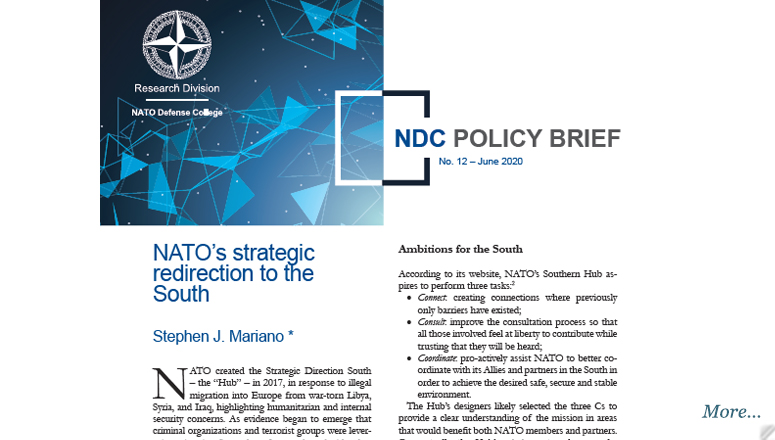 NATO created the Strategic Direction South â the âHubâ â in 2017, in response to illegal migration into Europe from war-torn Libya, Syria, and Iraq, highlighting humanitarian and internal security concerns. As evidence began to emerge that criminal organizations and terrorist groups were leveraging migration flows, these fears coalesced with other security concerns, not only disrupting the stability of European societies but also threatening the security of the Alliance. Eventually, NATO recognized that the situation was connected to deeper sources of instability and that solutions would require a comprehensive approach to the southernmost parts of âthe Southâ.

As the Hub matures, and NATO continues its adaptation campaign, a reorientation of the Hub could improve NATOâs ability to project stability and thus better serve the Alliance. Accordingly, this Policy Brief suggests clarifying the Hubâs role, revisiting the âno duplication ruleâ, and redirecting NATOâs focus in the South. Unlike some other recommendations which suggest allocating more resources to the Hub,1 this brief recommends trimming the edges of the Hubâs geography and narrowing its mission as ways of increasing trans-Atlantic security and contributing to Alliance cohesion.

1 (back) A. R. Vershbow and L. M. Speranza, âMore in the Med: revitalizing NATOâs southern strategy for an era of great power competitionâ, Atlantic Council, October 2019.