This website uses cookies to ensure we can provide you with the best browsing experience.
x
NDC - News- Graduation of Senior Course 136 and Change of Command Ceremony

Graduation of Senior Course 136 and Change of Command Ceremony

On Thursday 16th July, the NATO Defense College celebrated the graduation of Senior Course 136 and the Change of Command from LGEN Chris Whitecross (CAN F) to LGEN Olivier Rittimann (FR A). Attending as guest of honour was LGEN Hans-Werner Wiermann (DEU), Director General of the International Military Staff (DGIMS). 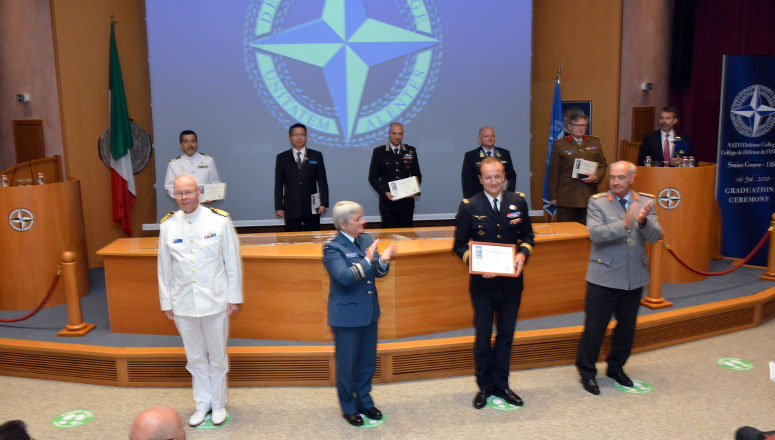 During the Office Call prior to the official ceremonies, General Enzo Vecciarelli, Italian Chief of Defence Staff offered his best wishes to the new Commandant and bid farewell to LGEN Whitecross.

The double ceremony took place after months of on-line education for the Course Members of Senior Course 136, caused by the COVID-19 pandemic. In her introductory speech, LGEN Chris Whitecross highlighted the efforts and commitment of Course Members over the months of lockdown and acknowledged the hard work accomplished by all the College staff to keep the NDC âopen for businessâ.

LGEN Hans-Werner Wiermann, in his address to the graduating Course Members, highlighted how everyone at the College had managed well in spite of the challenging times. âAll of you have shown initiative, innovation and the will to performâ, he said.

Before the diplomas were conferred, the President and Vice-president of Senior Course 136 Brigadier General IstvÃ¡n FilÃ³tÃ¡s (HUN A) and Dr Marion Behrends-Funke (DEU C) addressed their colleagues, stressing the hard work performed over the last few months in often difficult circumstances, making this particular Senior Course a unique and very special experience.

Following the graduation, the Change of Command Ceremony took place with the symbolic handover of the NDC flag from the out-going to the in-coming Commandant. In her last speech as NDC Commandant after more than three years at the helm of the institution, LGEN Whitecross recognized âit has been truly an honour to be the Commandant of the NDCâ which she described as an âincredible and unique institutionâ, and thanked everyone who had worked with her during these years.

The new Commandant, LGEN Olivier Rittimann thanked LGEN Whitecross and praised her leadership and determination in keeping the Senior Course going in the face of unprecedented challenges. In his address he reaffirmed his attachment to the goals of the College and said âI consider myself immensely privileged in having been appointed to head this very prestigious Collegeâ. Previous to taking up the command of the NDC, LGEN Rittimann was Vice Chief of Staff in SHAPE and played a significant role in the Allied Command Operations Task Force to combat the spread of the coronavirus.

Attending the ceremonies were the Ambassadors to Italy from NATO and partner countries, representatives of the Italian Armed Forces and other special guests, as well as Course Membersâ families and NDC staff. Space in the Auditorium was limited due to the restrictions imposed by COVID-19 but the event was broadcast on-line for all those who could not physically be present.