The third and final Field Study for Senior Course 137 began this week with a virtual visit to the United States. During this two-day tour, Senior Course Members were given an exceptional opportunity to hear from a U.S. National Security Panel and to discuss U.S. Governance, as seen internally, and how it intersects with NATO. 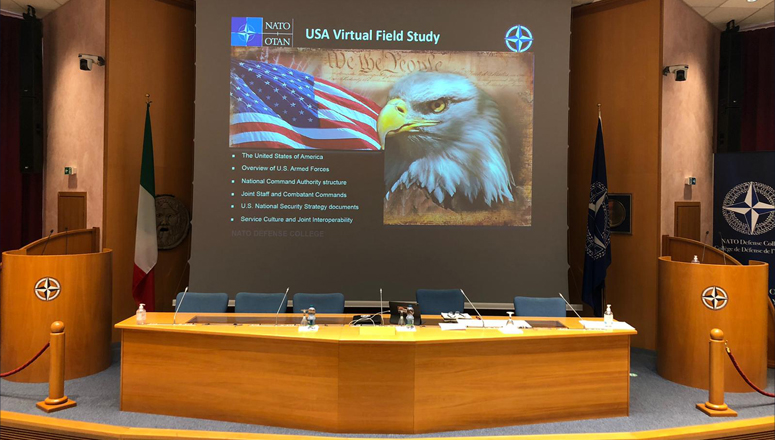 To kickstart day one, Senior U.S. Course Member Captain Everett Alcorn gave a brief introduction to the U.S. Armed Forces. Dr Stephen Mariano, Dean of the NATO Defense College, then introduced the members of the U.S. National Security Panel, whilst COL Varney served as moderator. During the session, the four panellists provided the respective perspectives of the National Security Council, the U.S. State Department, the Office of Secretary of Defense, and the Military Joint Staff (EUR/NATO/RUS). The panel was followed by NDC Commandant LGEN Olivier Rittimann's closing remarks.

On day two, Course Members had a unique âbehind the scenesâ look at how the U.S. military interacts with civilian authorities. They viewed how the U.S. Marine Corps ensures shared understanding between its military chain of command and legislators, all the while maintaining support for their service-level priorities. The final event offered Course Members insights from a sitting U.S. Congressman on critical points and characteristics about U.S.-NATO relations at the political level. Congressman Gerald Connolly, Head of the U.S. Delegation to the NATO Parliamentary Assembly, gave a detailed overview of the current U.S. political landscape, and as set against NATO and European priorities. Both sessions included enriching discussions during which Course Members received candid insights from guest lecturers.