This website uses cookies to ensure we can provide you with the best browsing experience.
x
NDC - News- The global dimensions of NATOâs future posture 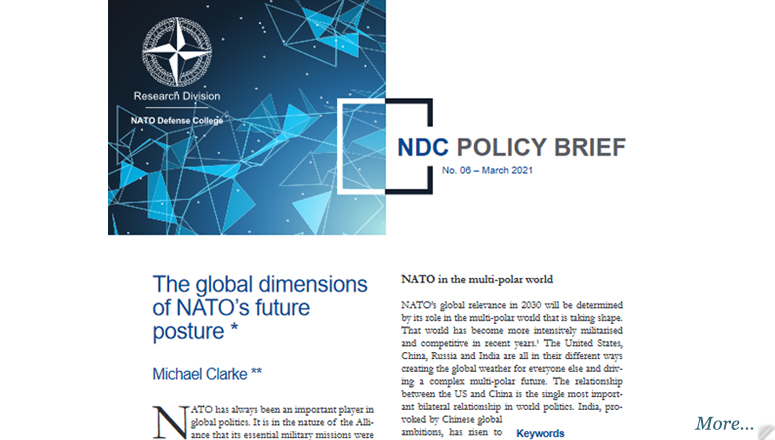 NATO has always been an important player in global politics. It is in the nature of the Alli ance that its essential military missions were always carefully defined and its geographical boundar ies strictly set by the collective defence commitments among its members. Nevertheless, NATOâs role as a politico-military institution among the great powers of the Cold War ensured it would always be global ly significant. It could not have been otherwise. This remains as much the case â though now in different ways â as we consider the international environment taking shape for the 2030s.

In this new environment the unavoidable global responsibilities of being a regional military alliance can be summarised in three ways; looking at NATOâs role in helping western powers defend their wider interests in the multi-polar world; helping meet the pseudo-ideological challenges posed by the rise of autocracies; and contributing to issues of the âglobal commonsâ.

* (back) This Policy Brief on the global dimension of the Alliance is the second of a series of three texts that the NDC releases in relation to the NATO 2030 process. The first text, on the political dimension, was released earlier in March (Policy Brief No.5), and the third one on the military aspects of NATOâs future, will be released in April.
** (back) Distinguished Fellow at the Royal United Services Institute (RUSI), London.