This website uses cookies to ensure we can provide you with the best browsing experience.
x
NDC - News- NATO strategy: integrating defense and collaborative security 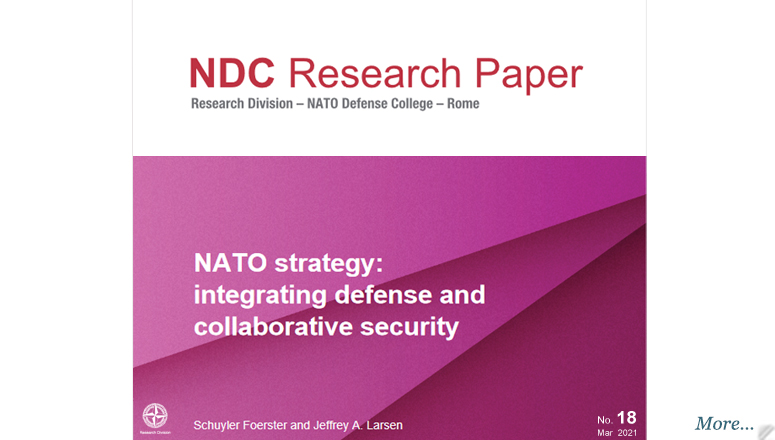 In November 2019, on the 100th anniversary of the end of World War One, The Economist explained that âthe first world war happened because a generation of Victorian leaders took for granted the stable order that had prevailed in Europe for decadesâ.1 In many respects, this is a refrain for our time as well. Despite the traumas of the Cold War and the more than a quarter century that has followed, Europe has enjoyed a substantial and, in many ways, unprecedented period of peace and prosperity. The geopolitical stability of the bipolar Cold War standoff gave way to a Europe that was much closer to the ideal of âa Europe whole and free and at peaceâ2 than at any time in its history. NATO as a Cold War political-military Alliance was the essential pillar of security that underpinned a broader movement toward European integration and transcended the nationalist tensions that had spawned two world wars in the twentieth century. With the end of the Cold War, both NATO and the European Union (EU) â together comprising the heart of what we call âthe Westâ in this paper â saw their boundaries and influence increase as each adapted to a new geopolitical reality rather than collapse following the demise of the Soviet Union and its empire in eastern Europe.

Despite what seemed for more than two decades to be a ânew normalâ of post-Cold War stability, however, Europe now faces the dangers of a revisionist great power on its eastern flank, alongside the persistent threat of terrorism, plus fragile political and economic institutions among many states on Europeâs southern periphery â all of which challenge the stability of European governments and societies.3 At the same time, the foundations of Western cohesion â collective defense, transatlantic security bonds, and European political and economic integration â are showing their age and potential fragility. These institutions are not doomed to failure or on the verge of disintegration, but neither can their continued success be taken for granted. Within the institutions and national capitals of NATO and the EU, there is no clarity about how to respond to the challenges of a strategic environment that has become unstable.

1 (back) Charlemagne, âLessons from history 100 years after the Armisticeâ, The Economist, 8 November 2018, www.economist.com/europe/2018/11/08/lessons-from-history-100-years-after-the-armistice
2 (back) President George H.W. Bush first outlined this vision â and this oft-repeated phrase â in a speech in Mainz, Germany, 31 May 1989. See âA Europe whole and freeâ, US Diplomatic Mission to Germany press release, https://usa.usembassy.de/etexts/ga6-890531.htm
3 (back) The challenges to NATO stability from the âSouthâ are qualitatively different than the issues that are the focus of this study, except insofar as they threaten Alliance cohesion and contribute to disparate threat perceptions among Allies. See J.A. Larsen and K. Koehler, âProjecting stability: NATOâs ânewâ mission to the Southâ, in E. Cusumano and S. Hofmai er (eds.), Projecting resilience across the Mediterranean, Palgrave Macmillan, Basingstoke, 2019, https://link.springer.com/chapter/10.1007/978-3-030-23641-0_3