This website uses cookies to ensure we can provide you with the best browsing experience.
x
NDC - News- Jihadi radicalization: between the local and the global

Jihadi radicalization: between the local and the global 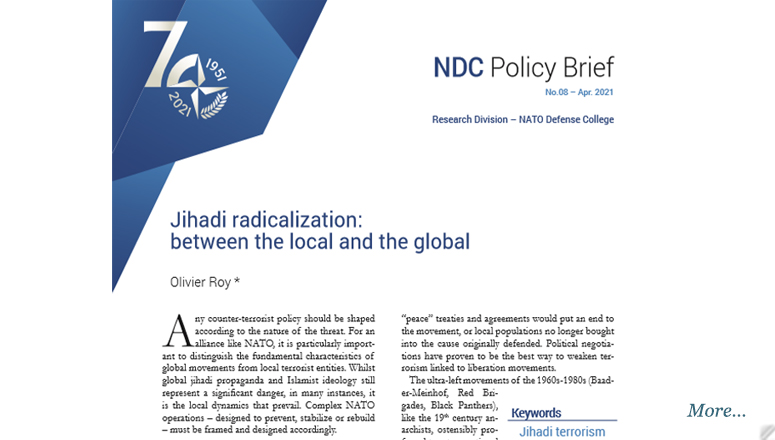 "Any counter-terrorist policy should be shaped according to the nature of the threat. For an alliance like NATO, it is particularly important to distinguish the fundamental characteristics of global movements from local terrorist entities. Whilst global jihadi propaganda and Islamist ideology still represent a significant danger, in many instances, it is the local dynamics that prevail. Complex NATO operations â designed to prevent, stabilize or rebuild â must be framed and designed accordingly.

The global jihadi phenomena we have been grappling with since the late 1990s contrast in form and pattern from previous forms of global terrorism. Historically, the first global terrorists were the anarchists of the end of the 19th century. But if their ideology (to destroy the âbourgeoisâ societies by way of âpropaganda by the deedâ, i.e. assassinating political leaders) was global, their deed remained, in fact, local. National police services would act rapidly to limit the impact of their actions. As such, those early global terrorists never rose to become a strategic threat. Later in the 20th century during the 1960s, most liberation movements such as the Algerian National Liberation Front (FLN), the Irish Republican Army (IRA), the Palestinian movements and the Basque ETA, among others, were bound to a specific conflict, all vowing to strike the interests of the âcolonialâ power both at home and abroad. This type of âliberation movementâ terrorism eventually waned for political reasons: either âpeaceâ treaties and agreements would put an end to the movement, or local populations no longer bought into the cause originally defended. Political negotiations have proven to be the best way to weaken terrorism linked to liberation movements."

* (back) Professor at the Robert Schuman Centre for Advanced Studies, European University Institute.