This website uses cookies to ensure we can provide you with the best browsing experience.
x
NDC - News- SC 138 â Russia Seminar

From 27-28 April 2021, SC 138 took part in âThe Russia Seminarâ, a two-day event devoted to an overall appreciation and discussion on Russiaâs geopolitical situation and interests, seen from both Russian and Western perspectives. 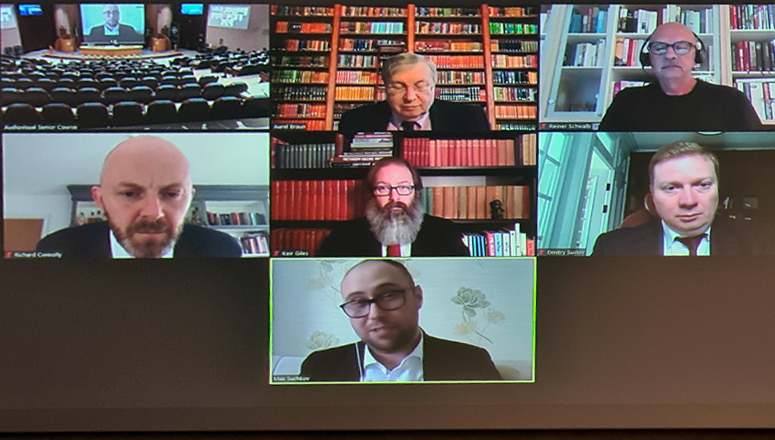 Day one of the seminar was dedicated to an overview of the key political, economic and security issues that dominate the Russian domestic agenda. Lectures began with a talk on Russiaâs geopolitical aspirations by BGEN Reiner Schwalb, German Defence AttachÃ© in Moscow. Dr Suchkov, from the Moscow State Institute of International Relations, then briefed Course Members on Russian policy in the Middle East, followed by Prof. Aurel Braun, of the University of Toronto and Harvard University, who spoke about Russia and its major partners. The panel was also composed of Dr Richard Connolly, from the Centre for Russian, European and Eurasian Studies, University of Birmingham, who spoke about Russiaâs economic situation and its major partners. He was followed by Dr. Dmitry Suslov, from the Center for Comprehensive Studies National Research University, who explained Russian domestic and foreign policy. Mr. Keir Giles, a Senior Associate Fellow of the International Security Department and the Russia and Eurasia Programme at Chatham House in London, briefed SC 138 on threat perceptions and the use of hybrid warfare.

The second day of the Russia Seminar proceeded by working groups, wherein participants gain deeper insight into the major issues facing Russia; consider strategies for NATOâs relations with Russia in the short and long term; and share opinions and knowledge through a âreflective learning process.â

The seminar was coordinated and moderated by Faculty Advisor Nancy Vellone (ITA C).