During the week of 7-11 June, the NATO Defense College hosted the Generals, Flag Officers & Ambassadorsâ Course (GFOAC 2021-1). The Course, entitled âNATO 2030, Future Challengesâ, brought together a total of 51 senior military and civilian leaders from 23 different NATO nations and partner states. The aim of the GFOAC is to improve participantsâ understanding of current politico-military issues within the Alliance, and to provide a critical overview of established and emerging priorities, as well as to foster discussion and professional interaction among participants. 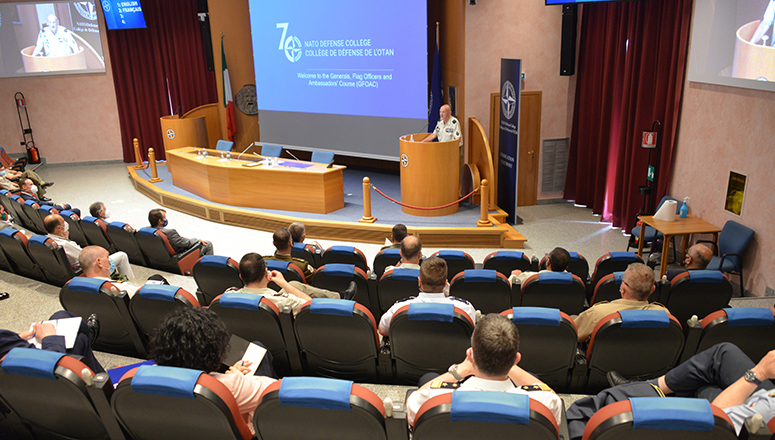 On Day 1 of the course, the NDC Commandant, LGEN Olivier Rittimann, gave the Welcome Address to GFOACâs participants. An introduction to the NDC was then made by the Head of Academic Planning and Policy, BGEN Rolf Wagner, acting as Course Director, which was followed by the Course Orientation, provided by the Course Coordinator COL Ignacio Fuente Cobo.

The first lecture of the course was delivered by Mr Giedrimas Jeglinskas, Assistant Secretary General for Executive Management at NATO HQ, on âFuture Challenges as seen from inside NATO Headquarters.â The last panel lecture of Day 1 focused on âThe Transatlantic Link: The Cornerstone of the Allianceâ, which was provided by Prof. Sten Rynning and GEN (ret) John Allen. The second day of the course offered lectures on âThe Western Encounter with the Restâ, by Prof. Christopher Coker, and âRussian Foreign and Domestic Policyâ, by Dr Dmitry Suslov and Mr Keir Giles. Wednesday was dedicated to presentations on the MENA region and China, with the contribution of Prof. Rachid El Houdaigui, Prof. Fawaz Gerges, Prof. Jonathan Holslag and Prof. Ashley Tellis. On Day 4, two major topics were discussed: âInnovation: Risks and Opportunitiesâ, briefed by NDC Dean Dr Stephen J. Mariano and Dr Bryan Wells; and âThe Future of NATOâ, led by Prof. Julian Lindley-French and and Prof. Peter Viggo Jakobsen. The last lecture of the course was delivered on Day 5 by GEN Sir James Rupert Everard, KCB, CBE, who focused on âA Strategic Commanderâs perspectives on NATO and the Euro-Atlantic Security Environment.â The 5-day course concluded with the Final Address by LGEN Olivier Rittimann, and was followed by the Conferment of Certificates.