This website uses cookies to ensure we can provide you with the best browsing experience.
x
NDC - News- Adapting NATO-Russia dialogue 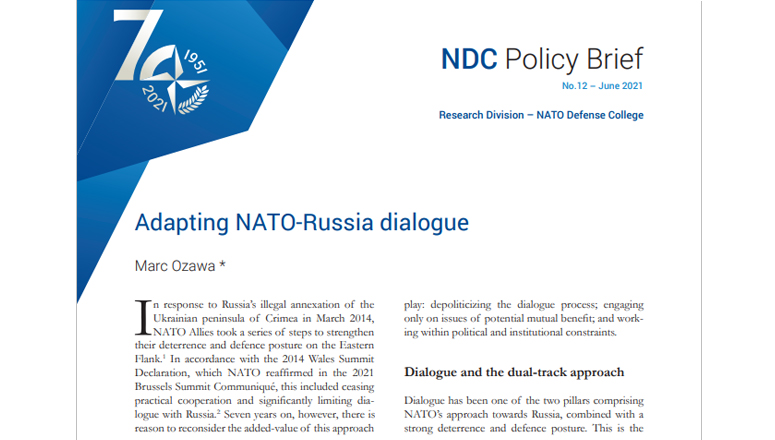 In response to Russiaâs illegal annexation of the Ukrainian peninsula of Crimea in March 2014, NATO Allies took a series of steps to strengthen their deterrence and defence posture on the Eastern Flank.1 In accordance with the 2014 Wales Summit Declaration, which NATO reaffirmed in the 2021 Brussels Summit CommuniquÃ©, this included ceasing practical cooperation and significantly limiting dialogue with Russia.2 Seven years on, however, there is reason to reconsider the added-value of this approach in light of the changing security landscape, NATO 2030 initiative, and de facto deadlock in the NATO Russia Council (NRC) over Ukraine. Moreover, the recent summit in Geneva between President Biden and President Putin highlights the emerging importance of adapting dialogue approaches with Russia.

This Policy Brief explores new avenues and proposes a modified dialogue format to complement the NATO-Russia Council (NRC or Council) along with a series of topics aimed at transparency and risk reduction in military operations and exercises, both of which are objectives that NATO set out at the Wales Summit. This does not mean a return to âbusiness as usualâ, but rather an adaptation of the current approach to introduce more stability in the relationship and, ultimately, a change in Russiaâs behaviour through engagement. Three components come into play: depoliticizing the dialogue process; engaging only on issues of potential mutual benefit; and working within political and institutional constraints.

* (back) Senior Researcher at the NATO Defense College (NDC).
1 (back) This Policy Brief was informed by workshop discussions that took place at the NDC. The author thanks those individuals who offered to be interviewed and colleagues for reviewing drafts and providing comments, particularly Thierry Tardy, Andrea Chiampan and Lukasz Kulesa.
2 (back) Considering that dialogue and cooperation are treated as a single pillar of NATOâs dual track approach (while deterrence and defense comprise the second), this analysis will use the term, âdialogueâ, as shorthand for not only communication but also cooperative activities in general.