This website uses cookies to ensure we can provide you with the best browsing experience.
x
NDC - News- SC139 & NRCC26 Inauguration Ceremony 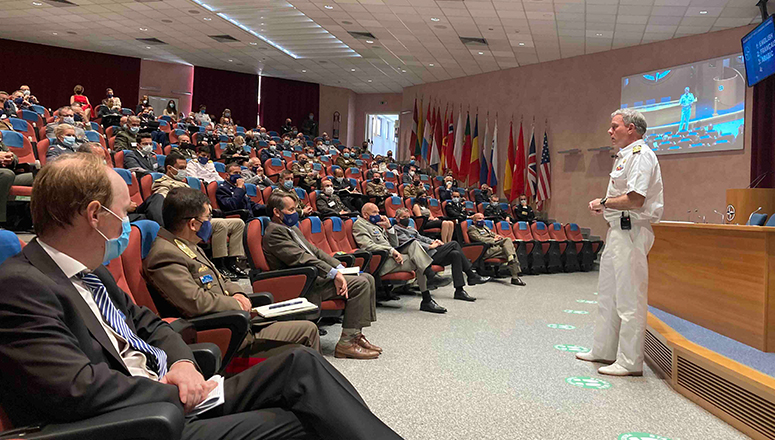 Admiral Rob Bauer, Chair of NATO Military Committee, was welcomed at the NDC premises and attended an Office Call with the NDC Commandant, Lieutenant General Olivier Rittimann. The inauguration ceremony commenced with opening remarks by the NDC Commandant who encouraged Course Members âto take full advantage of the opportunity your nations and NATO are giving you over the coming monthsâ. A total of 117 Course Members, senior officers and civilians from NATO member states and partner countries are attending the two courses, the Senior Course 139 and the NATO Regional Cooperation Course 26.

Admiral Bauer then delivered the Inaugural Address. During this first ever speech before Course Members, he identified some of the most important topics for NATO, including the situation in Afghanistan, the NATO 2030 initiative and the new Strategic Concept. On Afghanistan, he directed a message to all the men and women who served there by stating, âfighting for what you believe in is never in vain. Your service in Afghanistan has irreversibly changed the country. Just as it has irreversibly changed you.â

He also shared insightful comments about NATOâs processes to remain relevant in times of change and the Admiral highlighted the most important dimensions of the new NATO Military Strategy. Admiral Bauer called on Course Members to not only see NATO as it is, but to see the organization as it could or should be. In order to help the Alliance expect the unexpected, it must constantly challenge what is perceived as ânormalâ or as the status quo.

By way of conclusion, he reminded Course Members âyou are all vital links in the great chain that forms our Allianceâ. During the Q&A session under the Chatham House Rule, he also answered some of the Course Membersâ questions on current topics in what proved to be a highly insightful session that kicks off their first official day at the College.

After the Inauguration ceremony, the CMC awarded a NATO Meritorious Service Medal to Lieutenant General Olivier Rittimann, Commandant of the NATO Defense College, for his accomplishments during his tenure as Vice-Chief of Staff at SHAPE and to Colonel SÃ¸ren Knudsen, Faculty Adviser and Branch Head Curriculum Planning Branch at the College.