This website uses cookies to ensure we can provide you with the best browsing experience.
x
NDC - News- NATO Celebrates 70 years in Italy, Host Nation to the NDC

NATO Celebrates 70 years in Italy, Host Nation to the NDC 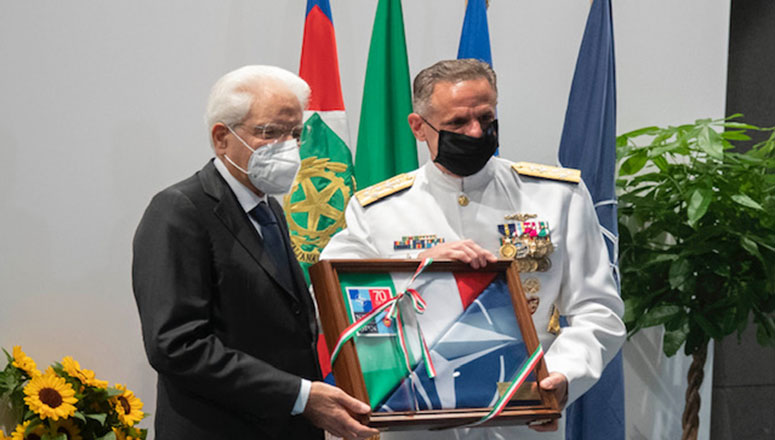 The ceremony was hosted by JFC Naples Commander, Admiral Robert Burke and attended by the President of the Italian Republic, Sergio Mattarella and NATO Deputy Secretary General Mircea GeoanÄ. Lieutenant General Olivier Rittimann, Commandant of the NATO Defense College was present among the many distinguished guests.

H.E Sergio Mattarella, Admiral Robert Burke and NATO Deputy Secretary General GeoanÄ made opening remarks. President Mattarella highlighted NATOâs extraordinary achievements in the last 70 years, especially in service of peace within Europe. For Italy, the Alliance, along with the EU, is a cornerstone of stability.

Todayâs event is a milestone in the Allianceâs history. It was a golden opportunity to pay tribute to the strong ties between NATO founding member Italy and the rest of the Alliance.

The NATO Defense College previously had the honour of hosting Admiral Burke at the start of his mandate in Naples, an occasion to discuss and enhance knowledge of NDCâs mission.

This year also coincides with the 70th Anniversary of the NATO Defense College in Rome, which moved to Italy in 1967 after its first years in France upon its foundation in 1951. This momentous celebration will be held at the College on 18 - 19 November. Lieutenant General Rittimann is most pleased to host the highest political, diplomatic, military and civil officials from the host nation and the wider Transatlantic community.