This website uses cookies to ensure we can provide you with the best browsing experience.
x
NDC - News- Partners Across the Globe and NATOâs Strategic Concept

Partners Across the Globe and NATOâs Strategic Concept 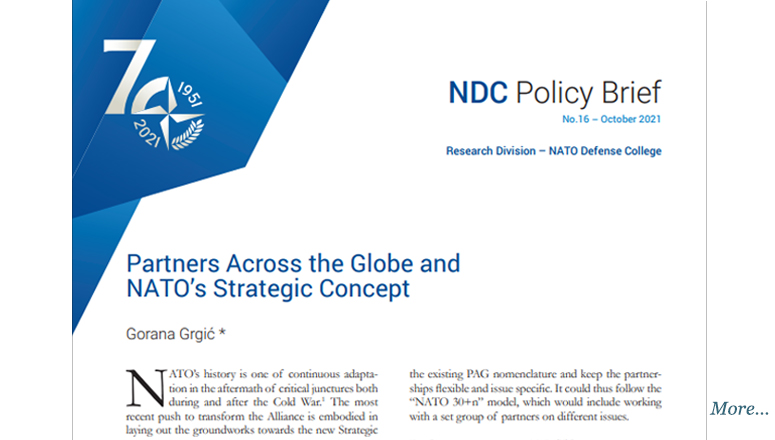 NATOâs history is one of continuous adaptation in the aftermath of critical junctures both during and after the Cold War.1 The most recent push to transform the Alliance is embodied in laying out the groundworks towards the new Strategic Concept and the institutional campaign âNATO 2030â which calls for the Alliance to become more politically active and global in reach, along with strengthening its military power.2 Among the issues this effort has spotlighted are NATOâs global partnerships which at the moment include Afghanistan, Australia, Colombia, Iraq, Japan, the Republic of Korea, Mongolia, New Zealand and Pakistan, i.e. NATOâs Partners Across the Globe (PAG).

This Policy Brief assesses the value of NATOâs Partners Across the Globe in light of the new security challenges and argues that preserving the status quo vis-Ã -vis global partnerships is not advisable since it is incompatible with the changing strategic goals. In providing the recommendations moving forward, it argues the Alliance has two options. First, the Alliance could overhaul the PAG grouping and distinguish between the types of partners with whom it can establish deeper cooperation. Namely, this would involve elevating the Asia-Pacific Four into an institutionalised grouping, rather than having it remain an informal platform for cooperation. Alternatively, NATO could do away with the existing PAG nomenclature and keep the partnerships flexible and issue specific. It could thus follow the âNATO 30+nâ model, which would include working with a set group of partners on different issues.

* (back) âPartners Across the Globeâ Fellow at the NATO Defense College between March and July 2021, and lecturer, Department of Government and International Relations & United States Studies Centre at the University of Sydney
1 (back) S.A. Johnston, How NATO adapts: strategy and organization in the Atlantic Alliance since 1950, Johns Hopkins University Press, 2017.
2 (back) J. Stoltenberg, âRemarks by NATO Secretary General Jens Stoltenberg on launching #NATO2030 â Strengthening the Alliance in an increasingly competitive worldâ, NATO, 8 June 2020