This website uses cookies to ensure we can provide you with the best browsing experience.
x
NDC - News- 50th Edition of the NATO Conference of Commandants

50th Edition of the NATO Conference of Commandants

The 50th edition of the NATO Conference of Commandants (CoC) was held in Copenhagen at the Royal Danish Defence College (RDDC) from 12 to 14 October 2021. The conference, entitled âProfessional Military Education and the Future Warfighterâ gathered 26 Colleges from NATO countries and 19 from partner countries, and 7 NATO bodies. 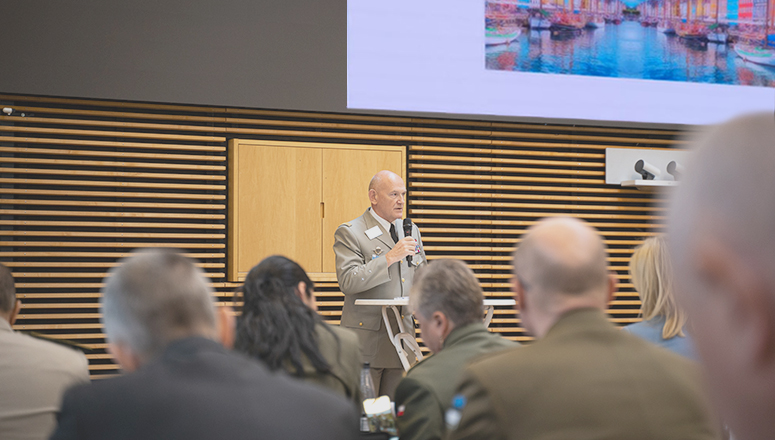 The year 2021 marks an important milestone for the NATO Defense Collegeâs (NDC) outreach and engagement activities. This is the 50th consecutive time that representatives from other Colleges gather to share ideas for the future of military education.

Lieutenant General Olivier Rittimann chaired the conference in his capacity of Commandant of the NATO Defense College. The participants were welcomed by the Danish Vice Chief of Defence, Lieutenant General Kenneth Pedersen, at the Icebreaker Reception.

On 13 October, Lieutenant General Rittimann welcomed the 85 participants among whom 16 took part online. âThis conference offers a unique forum in which Allies (and now partners) from across a wide and diverse collection of academic and education institutions, can come together to discuss contemporary and future issues that affect all of usâ. He encouraged attendees to benefit from the experience.

The discussions were divided into three panels.

The opening panel, moderated by the NDC Dean, Dr Stephen J. Mariano, was on âThe Future Warfareâ focussing on how war will be waged in 2030 and 2040. The second panel focused on âFuture Warfightersâ Skillsâ and was moderated by Dr Andrea Gilli, Senior Researcher at the NDC. The main discussion covered what skills future warfighters will need to win military confrontations.

On 14 October, "Professional Military Education Implicationsâ was the topic of the third panel, moderated by Colonel Luc Mees, Head of the Academic Policy Branch at the NDC. The session analysed how to develop desired expertise and skills of the Future Warfighter. The afternoon was dedicated to breakout sessions. The consolidation phase led to most enriching discussions.

Some of the takeaways from the sessions included the following: the changing landscape in education; new skills to be developed; dealing with uncertainty; the need for cooperation; and identification of standing skills for the leaders. The commandants also acknowledged the importance of sharing best practices among the various institutions, or the need adapt the practices which will further advance changes and adaptations already underway at the senior level of military education.

Rear Admiral Henrik Ryberg and RDDC Commandant and Lieutenant General Olivier Rittimann made the closing remarks, followed by an exchange of gifts.

The next edition of the NATO Conference of Commandants will be hosted by the German FÃ¼hrungsakademie in Hamburg, Germany in May 2022. The Commandants will address âResilience within Educationâ as the overarching topic.