This website uses cookies to ensure we can provide you with the best browsing experience.
x
NDC - News- The NATO Defense College Celebrates its 70 years as the Premier Academic Institution of the Atlantic Alliance

Rome â The NATO Defense College (NDC) celebrated its Platinum Anniversary on Thursday 18 and Friday 19 November 2021. Seventy years ago to the day, the NDC inaugurated Senior Course 1, the first class to embark on the NDCâs academic journey on 19 November 1951. 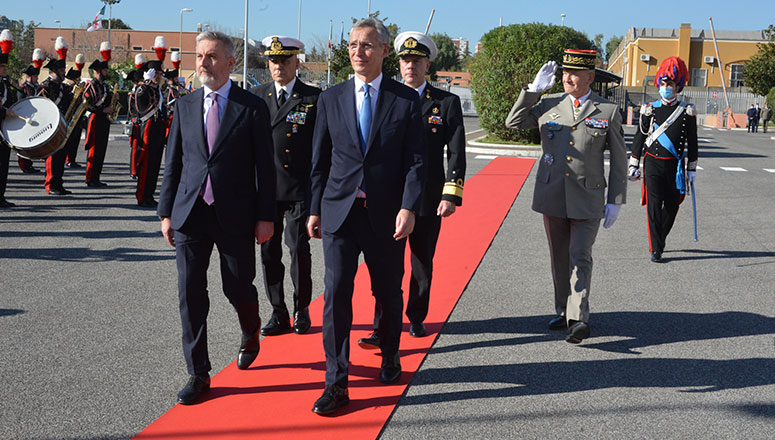 This most significant milestone was celebrated in tandem with the 68th edition of the Anciensâ Conference and Seminar. For more than seven decades, the NDC has been steadfast in educating todayâs leaders to face tomorrowâs challenges by delivering professional military education for Allied and Partner countries.

At 70, the âNDC is More Relevant than Everâ. To mark the occasion, the College held a military ceremony accompanied by academic sessions on Innovation and the implications for Future Military Education.

Commemorations began with the arrival of NATO Secretary General and Minister Guerini, who were saluted by the Honour Guards of the Italian Armed Forces. General Rittimann, together with the Chair of the Military Committee Admiral Bauer and the Italian Chief of Defence, Admiral Cavo Dragone then led a ceremonious inspection of the guards. Dignitaries in attendance were the Italian Permanent Representative, Ambassador TalÃ², NATO leaders, ambassadors based in Rome, and the highest political, diplomatic, military and civilian officials from the host nation and the wider Transatlantic community, together with the Anciens, who form a cohesive network of Senior Course graduates.

After the raising of the flag ceremony, a replica of the 1951 Paris entrance plaque from the initial location of NDC at the Ãcole militaire, was unveiled by Secretary General Stoltenberg and Minister Guerini.

Distinguished guests and dignitaries then gathered in the Maynard-Thorn Auditorium, where Lieutenant General Rittimann welcomed guests before offering the floor to Secretary General Stoltenberg for the opening address:


âIt is really worth dedicating time to honouring âourâ College. This is an opportunity for all of us â I hope â to appreciate how successful our institution has been in educating Senior Leaders from NATO countries and from partner countries; and how extraordinarily well the NDC has adapted to not only NATOâs changing requirements, but also to the changing nature of conflictuality, lending even greater weight and importance to the NDCâs founding mission.â

On this particular visit to the NDC, Secretary General Stoltenberg stated:

âLet me start by thanking Lieutenant General Rittimann for your leadership. The NDC is NATOâs leading institution for academic excellence and research. It makes a lasting contribution to our shared security. By helping our Alliance adapt to a rapidly changing world and stay ahead of the curve."

During his speech, he praised the work of the NDC , and evoked its involvement in the NATO 2030 process, âthe Collegeâs role in exploring new approaches and developing future leaders is more relevant than ever.â

The Secretary General was also awarded the title of Honorary Ancien of the College.

Minister of Defence Lorenzo Guerini, representing the Italian government, concluded the morning ceremony by stating, "It is with great pride that we celebrate the 70th anniversary of this prestigious institute, which Italy has the privilege of hosting. It was the foresight and strategic vision of General Eisenhower that assigned the College the function of preparing the civil and military leadership of NATO. Since then, this institution has provided an essential contribution in training generations of officials for the benefit of our Alliance, whose human capital is one of the resources to keep it vital, adapted to the times, and to the changing scenarios of the security environment."

With the conclusion of the 70th Anniversary celebrations, the 68th Anciensâ Conference and Seminar officially began on Friday 19 November. NDC Dean, Dr Mariano gave an inspiring presentation on General Dwight Eisenhower, founding father of the College and traced the Generalâs lifelong journey in education and training.

Ms Susan Eisenhower, General Eisenhowerâs granddaughter addressed the audience in a recorded tribute to her grandfatherâs personal and professional mission in strategic education, as also detailed her latest book âHow Ike Ledâ.
Dr Andrea Gilli, NDCâs Senior Researcher, then provided brief reflections on how Professional Military Education may adapt in the future, and as addressed in the NDCâs most recent Policy Briefs, authored by Dr Gilli and Dr Mariano respectively.

The 2-day event then concluded with the Anciens General Assembly meeting, a yearly gathering of the Anciens community.