This website uses cookies to ensure we can provide you with the best browsing experience.
x
NDC - News- NATO and the future of arms control

NATO and the future of arms control 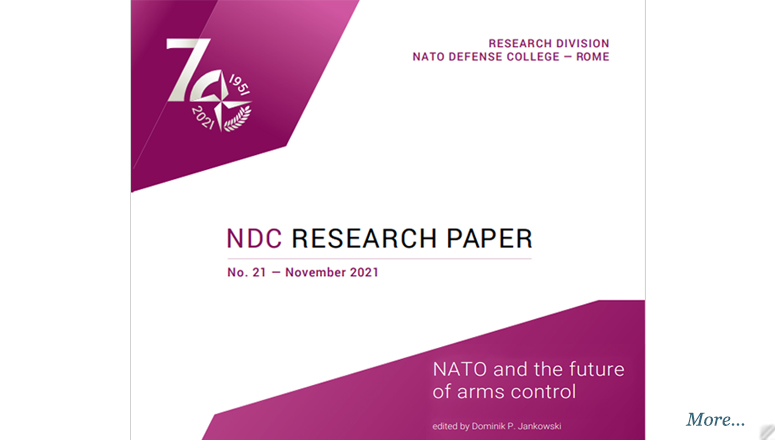 Foreword
For 70 years, NATO has been a bulwark of the international, rules-based order and adherence to international law. NATO has been successful in shaping norms and sharing values, including for arms control and non-proliferation. From the start, NATO has supported the role of arms control, disarmament, and non-proliferation and the essential contribution they make to achieve our security objectives.

NATO is an Alliance of democracies. It is not itself party to any treaty, but serves as a unique forum for Allied consultations on arms control: a platform for Allies to discuss and coordinate their arms control, disarmament, and non-proliferation policies and priorities, to build consensus, and develop common positions to strengthen and support the security architecture that has served us so well for over 70 years. The Vienna Document modernization package, the most comprehensive effort to update the Vienna Document since 1994, and Allied consultations to address Russiaâs violation of the Intermediate Range Nuclear Forces Treaty, are two representative examples of this unique platform.

NATO Heads of State and Government have invited the Secretary General to lead the development of NATOâs next Strategic Concept, which will reflect the Allianceâs arms control efforts. We are considering how to strengthen arms control as a security policy tool, and what further contributions NATO and Allies can make to this key element of the international rules-based order. This is particularly important in light of increasing challenges to the global arms control, disarmament and non-proliferation architecture that has protected us for decades. Russia continues to disregard or undermine key arms control treaties, while modernising and increasing its nuclear arsenal. China is investing massively in the scope and sophistication of its weapons systems. Other state and non-state actors seek to develop and acquire weapons of mass destruction. And emerging technologies, from drones to hypersonic gliders, offensive cyber capabilities to autonomy and Artificial Intelligence, are changing the way we think about arms control. An added level of complexity increasingly arises from disinformation campaigns by state and non-state actors, which seek to sow division and undermine trust.

We live in a complex and competitive world, where urgent crises demand our attention, from global pandemics to climate change. At the same time, we have an opportunity to revitalize our efforts to support the essential arms control architecture that has been the foundation for international security for decades. We need all of our energy and innovation viii NATO and the future of arms control to overcome todayâs challenges. As we navigate this landscape, we will be guided by our principles of security, stability and verification. Through our ongoing efforts to strengthen arms control, disarmament and non-proliferation, NATOâs essential work continues: preserving peace, preventing war and keeping our people safe.

I want to thank the NATO Defense College for this publication. Its timely, substantial and thought-provoking contributions by scholars and experts in this field will support us in the essential tasks before us.