This website uses cookies to ensure we can provide you with the best browsing experience.
x
NDC - News- Senior Course 139 ends Field Study 3 with a visit to Slovenia

On Monday 13 December, Senior Course 139 ended its Field Studies with a final stop in Ljubljiana, Slovenia. 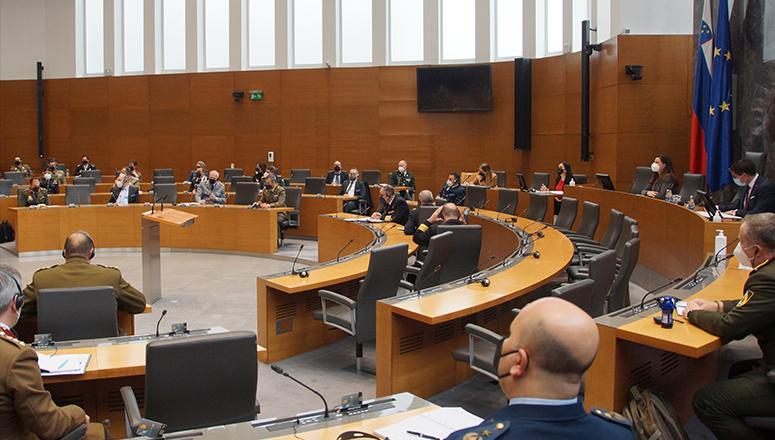 Upon arrival, and after a guided walking tour of the city center, NDC Director of Management Brigadier General Riccardo Brizi had the opportunity to thank on behalf of NDC Commandant, the Commander of Sloveniaâs Military Education Center, Brigadier General Zakrajsek, who conveyed his countryâs pleasure in hosting the NDC delegation. The two exchanged plaques in as sign of appreciation.

The morning began with a guided tour of Sloveniaâs National Assembly, during which the NDC delegation gained an in depth understanding of the countryâs origins and its and history.

After a lively Q&A, the NDC group headed towards the Ministry of Defence and the General Staff of Slovenian Armed Forces, where Brigadier General Anze Rode welcomed everyone on behalf of Sloveniaâs CHOD.

Mr Davorin Jerman, head of NATO branch within the Slovenian Ministry of Defence, gave a description of the countryâs Defence Policy and national priorities and challenges for the in implementing national defence policy. He also addressed the group with his perspective on the NATO 2030 process and the upcoming Strategic Concept, in parallel with the EUâs 2022 Strategic Compass. He defined national security strategy in several aspects. Priorities are to maintain a strategic partnership with the EU; keep Western Balkan countries engaged; combine military assets with other instruments of power; and continue the dual track approach with Russia. Ms Paulina Gorenc, Defence Policy Directorate focused on Sloveniaâs perspective on the EU.

Mr Peter Grk, Secretary General of the Bled Strategic Forum (BSF), and national coordinator for Western Balkans discussed the political and military situation in the region, providing an exhaustive overview of Sloveniaâs relations with the countries in the Western Balkans, and the security and economic challenges for the future.

The daily activities ended with a final briefing from Navy Captain Peter Papler, former Faculty Advisor at the NDC until 2019 and currently Head of Sloveniaâs General Staff Military Policy and Strategic Planning Division. He explained the evolution and current situation of the Slovenian Armed Forces in the context of international and national security. The NDC delegation was given a detailed and candid briefing on the current challenges and structural conditions of Slovenian Armed Forces to fulfil requirements in the framework of their close engagement in exercises and international crisis operations.