This website uses cookies to ensure we can provide you with the best browsing experience.
x
NDC - News- Staff Ride & Study of the 1944 Montecassino Operations

On 12 and 13 January 2022, Senior Course 139 took part in an NDC Staff Ride, which included a Briefing Day and a Field Day in Montecassino. 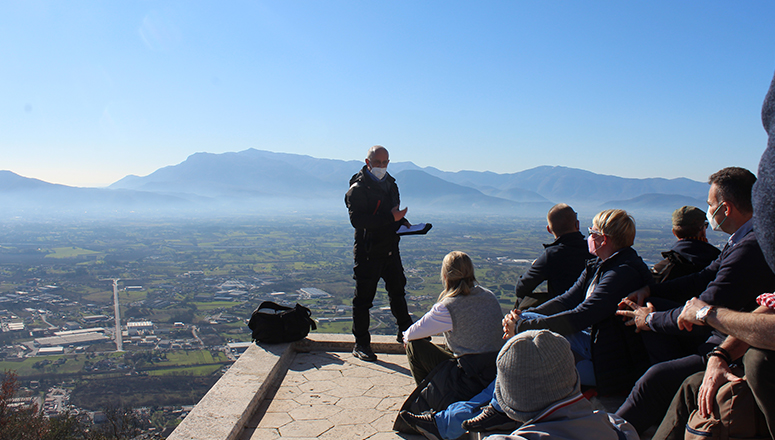 For the second consecutive time, the Senior Course embarked on the Staff Ride to enhance their understanding of the complexity of multinational/coalition/allied operations. The two-day programme combines stimulating academic content spanning from the perennial challenges facing our Alliance from strategic decision-making; practical, political and humanitarian considerations of âwar amongst the peopleâ; to the reminders of the harsh ârealities of warâ.

The Briefing Study Day was opened with the lecture of H.E. Ambassador Anna Maria Anders, the current Ambassador of Poland to Italy, who discussed Montecassinoâs significance in Polish history and identity. She also spoke of her father, GEN WÅadysÅaw Anders, and his role as a national leader and Commander of the two Polish Corps, which he led in the campaign to liberate Italy and the historic Battle of Montecassino. âHe was more than a Commander. He was a spiritual leader to his soldiersâ.

Briefs were delivered by Subject Matter Experts who joined virtually. Dr Rob Johnson, Director of the Changing Character of War (CCW) Research Centre at Oxford University, focused on the âObservations on the Grand & Military Strategic considerations of the Italian Campaign & lessons emerging on the changing character of warâ. Professor Niall Barr, professor of Military History and Dean of Academic Studies (Head of Department) of the Defence Studies Department of the Kingâs College London, focused on âThe Italian Campaign â an overview & commentary on the key operational dynamics from Salerno to the liberation of Romeâ.

Dr Magnus Pahl, from the Bundeswehr (German Army) Museum of Military History, gave the lecture on the Italian Campaign from a German perspective. TCOL (Ret.) Christophe GuÃ© finished the briefing day with âThe CEF at Montecassinoâ which examined the significant impact of the the French Expeditionary Corps, comprised as it were of nationalities whom are now amongst NATOâs partners.

The second day unfolded on the field of the battle of Montecassino. An introduction to the day was given by Colonel David Hannah, Staff Ride Exercise Director, who gave a brief overview of the dayâs activities. Subject Matter Experts accompanied Course Members and Staff in each one of the stands to explain the key events of the Montecassino Operations.

San Pietro Infine was the first stop. The Mayor of the City, Signore Antonio Vacca, paid a visit to the NDC delegation to share a few welcoming words. The Mayor, together with the NDC Commandant, Lieutenant General Olivier Rittimann laid a wreath in the town memorial to pay tribute to the civilians who died during the war. The village, maintained in its post-war ruined state, serves is a memorial to those whose lives were lost.

St Angelo in Theodice was the second stop, where Course Members heard briefings from Subject Matter Experts. This was followed by a walk to Point 593, a key place for the battle of Montecassino and during defence of the Abbey.

In the afternoon, a ceremony to commemorate and to pay tribute to the Fallen from all nations in the fighting at Montecassino took place at the Polish Cemetery. The NDC Commandant Lieutenant General Olivier Rittimann, together with the Polish Senior National Representative, laid a wreath in the name of the NATO Defense College.

The day ended with the visit of the Abbey of Montecassino where Course Members received briefs on the historical and cultural significance of the Monastery and the complex ethical and legal considerations of protection of cultural property in times of conflict. It also provided an ideal opportunity to admire one of Europeâs great architectural icons bathed in warm Italian sunshine.