This website uses cookies to ensure we can provide you with the best browsing experience.
x
NDC - News- The rise of China and NATOâs new Strategic Concept

The rise of China and NATOâs new Strategic Concept 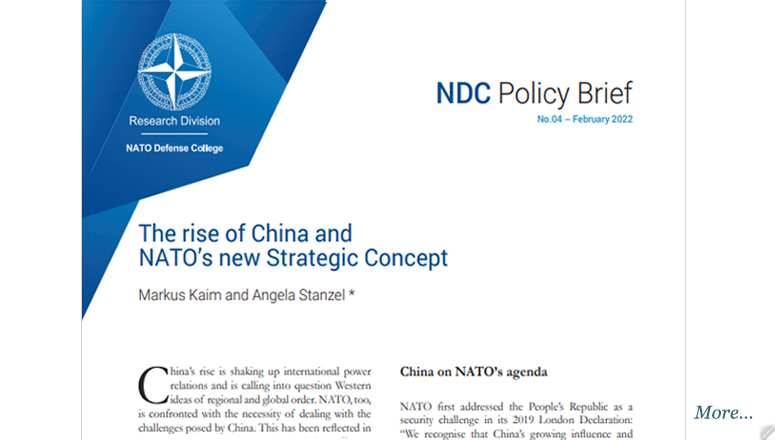 Chinaâs rise is shaking up international power relations and is calling into question Western ideas of regional and global order. NATO, too, is confronted with the necessity of dealing with the challenges posed by China. This has been reflected in various NATO statements since 2019. According to Secretary General Jens Stoltenberg, âChina does not share our valuesâ and âuses modern technology, social media [and] facial recognition, to monitor, to do surveillance of their own population in a way we have never seen beforeâ. âAll of this makes it important for NATO to strengthen our policy when it comes to Chinaâ, he added.1

NATO Allies only paid attention to the significance of the Peopleâs Republic on their security policy comparatively late. For a long time, the dominant view was that the Alliance and Beijing were pursuing a number of common interests, e.g. in the areas of crisis management, counter-piracy and in the countering of the proliferation of weapons of mass destruction.2 Only Chinaâs rise on the international scene and the resulting rivalry with the US in recent years have led to Beijingâs foreign policy to appear on the Allianceâs agenda.

* (back) Markus Kaim is Senior Fellow in the International Security Division at the German Institute for International and Security Affairs (SWP); Angela Stanzel is Associate in the Asia Division at SWP.
1 (back) âHead of NATO says member states need to âstrengthenâ policy on Chinaâ, CBC, 13 June 2021.
2 (back) T. M. Chacho, âPotential partners in the Pacific? Mutual interests and the sino-NATO relationshipâ, The Journal of Contemporary China, Vol.23, Iss.87, 2014, pp.387-407.