This website uses cookies to ensure we can provide you with the best browsing experience.
x
NDC - News- Lessons from NATO's intervention in Afghanistan

Lessons from NATO's intervention in Afghanistan 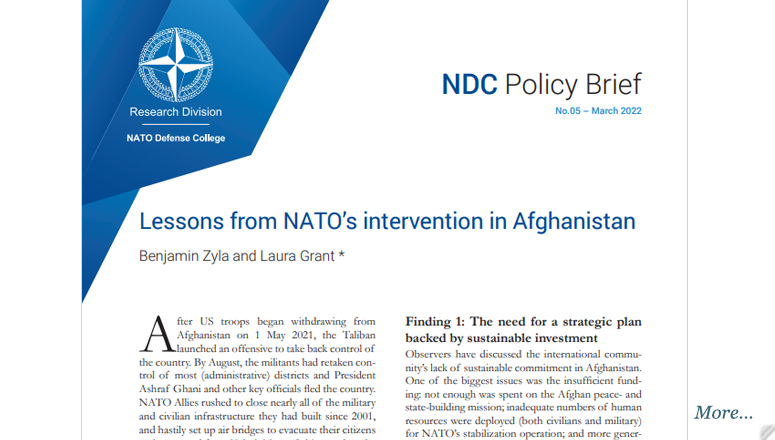 After US troops began withdrawing from Afghanistan on 1 May 2021, the Taliban launched an offensive to take back control of the country. By August, the militants had retaken control of most (administrative) districts and President Ashraf Ghani and other key officials fled the country. NATO Allies rushed to close nearly all of the military and civilian infrastructure they had built since 2001, and hastily set up air bridges to evacuate their citizens and personnel from Kabul. Most of this was done by the member states while NATO as an organization mainly stood on the fringes

Critics have focused on these events to call for an evaluation of this hasty and uncoordinated withdrawal, and of the entire Afghan intervention more generally. Among others the NATO Parliamentary Assembly called upon member governments and parliaments of the North Atlantic Alliance not only to âconduct a thorough, clear-eyed, and comprehensive assessment of the Allianceâs 20-year engagement in Afghanistanâ, but also demanded to incorporate these lessons into âNATOâs New Strategic Conceptâ.1

* (back) Benjamin Zyla is professor of international politics at the University of Ottawa, Canada, and was the 2021 MINDS Fellow at the NATO Defense College. Laura Grant holds a Ph.D. from the School of International Development and Global Studies at the University of Ottawa.
1 (back) NATO Parliamentary Assembly, Defence and Security Committee, âLearning the lessons learned of NATOâs engagement in Afghanistanâ, 139 DSC 21 E rev. 2 fin, 2021.