This website uses cookies to ensure we can provide you with the best browsing experience.
x
NDC - News- War in Europe: preliminary lessons 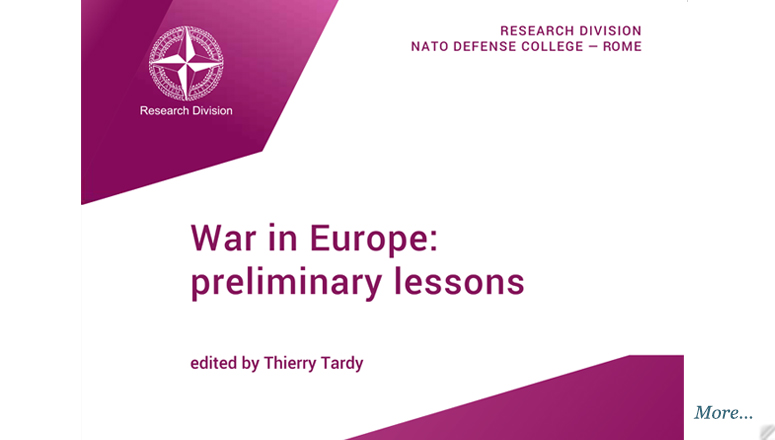 Thierry Tardy
The 24th of February, 2022, will remain a watershed date in European history; that day, the Russian regime led by President Vladimir Putin launched a military invasion of Ukraine, marking the return of war in Europe for the first time in decades.

Much of what has transpired since the warâs onset has come as a surprise, whether in its political and strategic dimensions or in operational and tactical terms. The war was not an impossibility prior to 24 February, but it was certainly viewed in the West as improbable from the perspective of a rational cost-benefit analysis. This is especially so when one considers Putinâs attempt to swallow the entirety of Ukrainian territory. The means with which Russia attempted its conquest also raise a number of questions as to its armed forcesâ level of preparedness, organisation, and operational ability. Today, it is clear that Russiaâs military capacity was overestimated while Ukraineâs capacity to resist was underestimated. We have witnessed Russian forces encountering difficulties in achieving their military objectives and a Ukrainian nation-state â including its armed forces and its society â determined to deny Russia any gains. Politically, the Russian regime misread the very nature of the Ukrainian nation, which proved strong and unanimous in its rejection of the Russian endeavour â even in the countryâs supposedly Russian-leaning East (with the exception of part of the Donbas).

* (back) Thierry Tardy is the Director of the Research Division at the NATO Defense College. He is also Visiting Professor at the College of Europe in Bruges. His research and teaching areas cover NATOâs policy and adaptation, European security, the EUâs Common Security and Defence Policy (CSDP), and NATO-EU relations. His forthcoming book is The Nations of NATO. Shaping the Allianceâs relevance and cohesion, Oxford University Press, 2022 (edited).