This website uses cookies to ensure we can provide you with the best browsing experience.
x
NDC - News- SC140 Field Study in Norfolk: 11 May 2022

On 11 May 2022 SC140 Course Members spent the day in Norfolk, where they visited Allied Command Transformation. 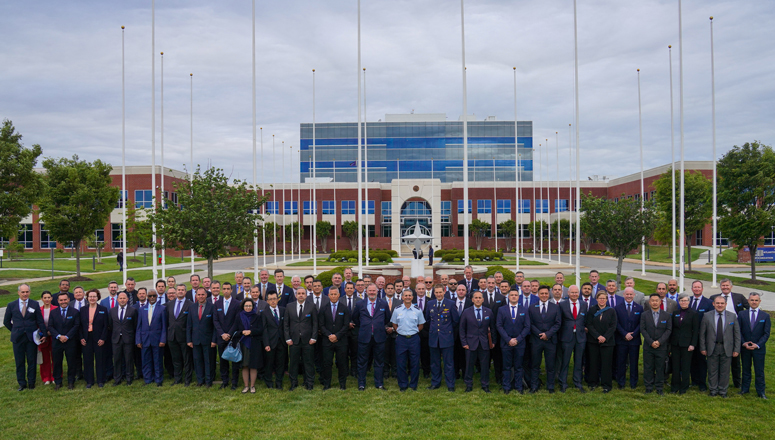 The first stop in the city of Norfolk was Allied Command Transformation (ACT), where the NDC delegation was welcomed by the Deputy Chief of Staff, Capability Development (DCOS CAPDEV), Lieutenant General David Julazadeh (USA AF), who recalled his personal experience at the NDC.

The first briefing of the day was delivered by the Assistant Chief of Staff Strategic Plans and Policy (ACOS SPP), Brigadier General Didier PolomÃ© (BEL AF), focusing on warfare development and the NATO Defence Planning Process (NDPP), the NATO Warfighting Capstone Concept (NWCC), and resilience. Brigadier General PolomÃ© outlined ACTâs main tasks, i.e. working on programmes, setting standards, planning innovation, delivering capabilities, educating and training, and supporting operations. Elaborating on the NWCC, he gave a description of the future fights and warfare development agenda, before moving on to the NDPP and the various phases of this process, from âEstablish Political Guidanceâ to âReview of Resultsâ.

Lieutenant General David Julazadeh then gave a presentation on capabilities and the Innovation Hub, sharing insights about the Hubâs organization and structure, workforce and major ongoing programmes in the areas of command and control, CIS and infrastructure. Lieutenant General Julazadeh also presented the concept of multidomain operations and explained how the synchronization process is crucial to the end state in this context. The last topic he touched upon was digital transformation and the associated roadmap, adding that the main challenge for the future will be interconnectivity for all digital platforms.

Later, Brigadier General Dieter Kohl (DEU A), Innovation Champion and Special Advisor, gave a briefing on The Impact of Emerging Disruptive Technologies and the Future Battlespace, in which he explained how emerging technologies such as hybrid, cyber, artificial intelligence, quantum, biotechnologies, hypersonic weapons and space-based capabilities can affect the information environment as well as operations.

The last session was an interactive panel discussion with Chief of Staff ACT, Vice-Admiral Guy Robinson (GBR N); Lieutenant General David Julazadeh; Assistant Chief of Staff Joint Force Development ACT, Brigadier General Ilmars A. Lejins (LVA A); Brigadier General Didier PolomÃ© and Brigadier General Dieter Kohl. The discussion included a Q&A period where Course Members delved into various topics with the panellists, such as the Russian invasion of Ukraine and its consequences for the future, as well as capability development and technology innovation in different fields. At the end of the discussion, a representative of SC140 Course Members thanked all panellists for their participation.

The second part of the visit was dedicated to the Joint Force Command - Norfolk (JFC-NF), where the NDC delegation was briefed by Deputy Chief of Staff for Operations (DCOS OPS), Rear Admiral (CDRE) Staale Pedersen (NOR A), who recalled the establishment of JFC-NF following the NATO Brussels Summit in 2018 and outlined its structure and roles.