This website uses cookies to ensure we can provide you with the best browsing experience.
x
NDC - News- 51st Conference of Commandants

The 51st Conference of Commandants is being held from 17 to 19 May 2022 at the Bundeswehr Command and Staff College in Hamburg. The international engagement event gathers participants from Allied and partner nations to discuss the future of professional military education, focusing this year on âResilienceâ. 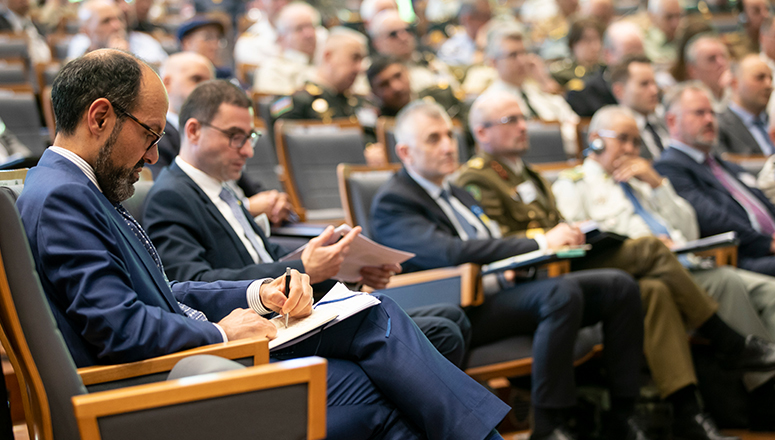 Since 1972, the NATO Defense College has hosted the yearly Conference of Commandants in cooperation with another defence college. This year the Conference was organized with the Bundeswehr Command and Staff College in Hamburg, and its main theme is âResilienceâ. More than 90 participants from all over the world, representing Allied and partner nations, national defence institutes, private companies, universities, think tanks and other academic institutions, are taking part in this event.

The Conference kicked off on 17 May with the NATO Commandantsâ session, and the first lecture was delivered by the Allied Command Transformation (ACT). Supreme Allied Commander Transformation General Philippe Lavigne opened the session with introductory remarks on resilience, followed by a lecture on âRight People Right Skills (RPRS) as an Enabler of Future Leaders & Warfightersâ, presented by Brigadier General Ilmars A. Lejins, Assistant Chief of Staff Joint Force Development, and Navy Captain Felix PeÃ±uelas, Branch Head Human Capital Enhancement and Individual Training, both from ACT.

On 18 May, the 51st Conference of Commandants was officially opened by Lieutenant General Olivier Rittimann, who chairs the Conference in his capacity as Commandant of the NATO Defense College, together with Major General Oliver Kohl, Commandant of the Bundeswehr Command and Staff College. âThis conference offers a unique forum in which Allies and partners from across a wide and diverse collection of academic and education institutions can come together to discuss contemporary and future issues that affect all of usâ, the NDC Commandant remarked.

The lectures and discussions of the day focused on âResilience in the Organizationâ. The day started with several lectures on resilience aimed at giving participants a better grasp of the concept as viewed from different approaches. First, the NATO approach, by Mr Hasit Thankey from NATO HQ, then the European Union approach by Mr Jukka Savolainen, from the Hybrid Centre of Excellence. The third lecture, centred on cyber resilience, was presented by Ambassador Shota Gvineria from the Baltic Defence College.

Later, Lieutenant Colonel Thorsten Kodalle from the Bundeswehr Command and Staff College presented a "gaming-based learning approach that helps to increase individual resilience in the field of cyber security".

In order to discuss the topics and format of the Conference, a working group with a number of defence colleges was established several months ahead of the Conference. Lieutenant Colonel Kurt Bogaert from the Royal Military Academy of Belgium and Mr Garry Hearn from the Defence Academy of the United Kingdom shared with other participants the lessons identified by their colleges on how their institutions had coped with the COVID-19 pandemic as an exercise in resilience.

Interaction among attendees at the Conference is key to its success. Discussions on the various topics are highly encouraged so that a common understanding can be reached on the main issues and on their implications for professional military educational institutions.

The participants divided into syndicates to discuss the dayâs topics further, after which they reassembled to share their findings. Some of the key ideas related to technologies applied to education, the way colleges are now approaching education, the importance of leadership, the resources needed, the value of war-gaming in developing resilience and the importance of adaptation and innovation within every organization.

The first full day of the 51st Conference of Commandants concluded with a reception hosted by the Mayor of Hamburg, Mr Peter Tschentscher, at the spectacular City Hall.