This website uses cookies to ensure we can provide you with the best browsing experience.
x
NDC - News- Field Study 3 visit to Lithuania for Senior Course 140

On 14 June 2022, Senior Course 140 visited Lithuania as the fourth stop on Field Study 3. The Lithuanian Parliament was the venue for the NDC delegation’s morning sessions. This was followed by briefings on Lithuania’s defence and Armed Forces and on the NATO presence in the country. 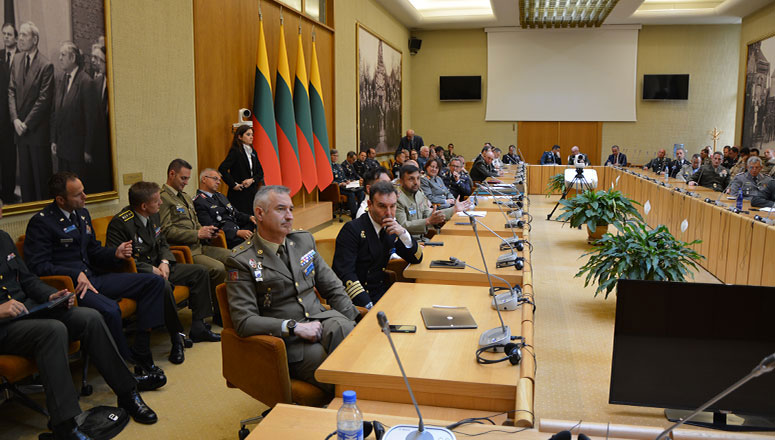 The Lithuanian Parliament was the imposing building where Course Members were welcomed by Deputy Speaker Paulius Saudargas. “Today is an important day, it is important to have you here”, he said in his address to the NDC delegation. He spoke about the unprecedented security challenges that Lithuania is currently facing, about Russia’s unprovoked war against Ukraine, and also about Lithuania’s approach to the Madrid Summit and its expectations regarding the new Strategic Concept.

Laurynas Kasčiūnas, Chairman of the National Security and Defence Committee, was the second briefer of the morning. In his speech, he covered topics such as cooperation with the other Baltic countries, with whom Lithuania has much in common but also differing interests on some specific issues. The three pillars of their defence module, as he explained, include collective security, strengthening capabilities and engagement with society.

The NDC delegation were fortunate to visit the Hall of the Act of 11 March, the very room where Lithuania’s independence was restored on 11 March 1990, which was an invaluable opportunity to gain a better understanding of the country’s history.

“I think we had a great visit, particularly in the morning, where our visit to the Parliament coincided with the Day of Mourning and Hope*, said Colonel Eric de Landmeter, a Dutch Army officer and Course Member from Committee 7. Colonel de Landmeter was the Netherlands’ Defence Attaché in Russia before attending the Course, and although he had been in Lithuania on previous occasions, this was his first time in the country’s capital.

“You can study a country in a classroom, or you can study it from books, but it can never replace a real visit. Seeing with your own eyes what it actually looks like, meeting people, experiencing the culture… it gives you a much better understanding of the country´s characteristics and security preferences, which is very important”, highlighted Colonel de Landmeter on the visit to Vilnius.

In fact, the security of the country was one of the focus points of the afternoon sessions, led by representatives from the Lithuanian Ministry of Defence and Armed Forces. Topics included Lithuania’s defence policy, the organization and capabilities of its Armed Forces, as well as hybrid threats and defence cooperation. Speakers also addressed the way operations are conducted, and the information environment assessment performed by the Armed Forces STRATCOM Team.

“Another advantage of this kind of trip is that they help you realize that the position we are in in many parts of Europe is not how others see the world right now. And it makes you even more aware of the fact that we cannot take freedom for granted, because things can suddenly change”, said Colonel de Landmeter.

There was also time to hear about the NATO forces present in the country. Colonel Peter Nielsen from the Danish Armed Forces, Commander of the NATO Force Integration Unit Lithuania, spoke about the core mission of this international unit, which has been a visible and continuous NATO presence in Lithuania since 2015. Its primary responsibility is to ensure a rapid deployment of the Very High Readiness Joint Task Force (VJTF).

In the evening, a reception, hosted by the Training and Doctrine Command (TRADOC) Commandant, Brigadier General Alvydas Šiuparis – an Ancien from Senior Course 123, was held to wrap up this insightful visit to a country that has been a NATO Ally since 2004.

* (back) Observance marking the day, in 1941, when the Soviet authorities started mass deportations of Lithuanian residents to remote areas of the USSR - Lithuania marks 81st anniversary of Soviet deportations - LRT