This website uses cookies to ensure we can provide you with the best browsing experience.
x
NDC - News- Field Study 3 visit to Latvia for Senior Course 140

From 15 to 16 June 2022, Senior Course 140 visited Latvia as the last stop on Field Study 3. During their visit to the Baltic state, the NDC delegation heard briefings on the countryâs current defence challenges and its defence and security priorities. 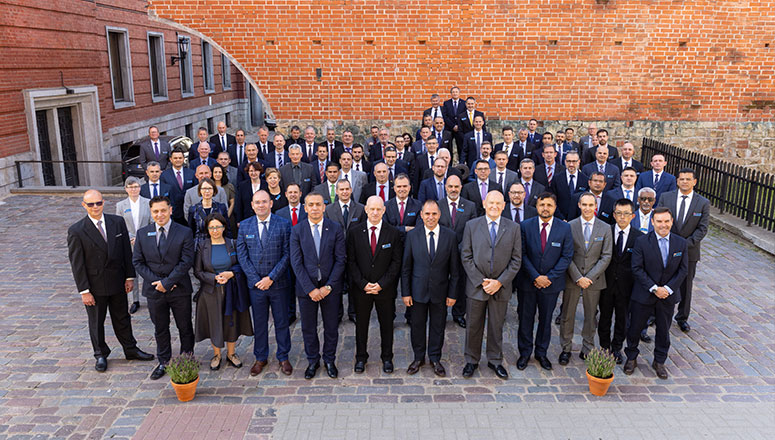 Upon their arrival on 15 June in the Latvian capital, Riga, the NDC delegation was welcomed by Lieutenant General (Ret.) Raimonds Graube, Military Adviser to the Defence Minister, and former Chief of Latviaâs National Armed Forces. He stressed the importance of the critical thinking that the Senior Course provides in order to be wary of propaganda and stay united regardless of borders.

On 16 June, SC140 heard a welcome speech by Mr JÄnis Garisons, State Secretary of the Latvian Ministry of Defence. He spoke about the current situation in Ukraine and how it evoked difficult memories for Latvians, about the changes facing NATO collectively and about Latviaâs cooperation with neighbouring countries.

Senior Course 140 is composed of Members from 34 nations, both NATO and partner countries. For Major Diego Ospina Quintana from the Colombian Army, Course Member from Committee 1, observing the differences between his culture and those he encountered during the Field Study trip has been one of the highlights of the experience. He also found the academic part very enriching: âalthough we had already discussed a lot about Russia at the NDC, here, we were able to touch on these topics more directly and find out for ourselves what people who are living in bordering countries and have a more immediate perception of the issue really think and expect. It was very interesting.â

The second meeting of the day was with Mr JÄnis KaÅ¾ociÅÅ¡, National Security Adviser to the President of Latvia and Secretary of the National Security Council. In his briefing, he addressed recent developments in the security environment, the importance of strategic leadership in times of crisis, and the measures to improve Latvian security and defence. He outlined the different challenges his country is currently facing and stressed the importance of being aware of the changes at hand and of protecting democracy.

Ms Ginta BrÅ«mane-Gromula, Director of the Defence Policy Department at the Latvian Ministry of Defence was the third briefer of the day. She spoke about the recent changes in the security environment and their impact on Latvian security and defence. She also focused on the challenges, priorities and achievements of Latviaâs foreign and security policy, its priorities regarding force and capability development, the funding of its national defence, and the countryâs expectations and priorities for the NATO Summit in Madrid.

In the afternoon, the first briefing, centred on the National Armed Forces of Latvia, was presented by Lieutenant Colonel Intars Jundze, Deputy Chief of Staff for Operations and Acting Chief of the Land Component in the National Armed Forcesâ Joint Headquarters. He described the mission of the Armed Forces, their priorities, plans and capabilities. Latviaâs regional and international cooperation was also among the topics he addressed.

The last briefing of the day was delivered by Mr JÄnis Karlsbergs, Policy and Publication Manager at the NATO Strategic Communications Centre of Excellence. He started his presentation by pointing out that âthe story is everythingâ. He then went on to focus his talk on the strategic narrative around Russiaâs war in Ukraine.

The visit to Latvia marked the end of Field Study 3. The Field Study trip started on 7 June and over a 10-day period, the NDC delegation visited Iceland, Sweden, Estonia, Lithuania, and Latvia. The trip enabled Course Members to expand their knowledge of the Baltic region, of Alliance missions in the Northern area, in particular air policing, but also of the way NATO partner Sweden organizes its defence.