This website uses cookies to ensure we can provide you with the best browsing experience.
x
NDC - News- Senior Course 140 Graduation Ceremony

On Friday, 15 July 2022, Senior Course 140 formally completed their 22-week Course at the NATO Defense College (NDC) with a Graduation Ceremony. The Guest of Honour, Admiral Joachim RÃ¼hle, Chief of Staff of Supreme Headquarters Allied Powers Europe, delivered the Graduation Address, followed by recognition of authors of the best Individual Papers, the awarding of the Eisenhower Prize, and the conferment of diplomas. 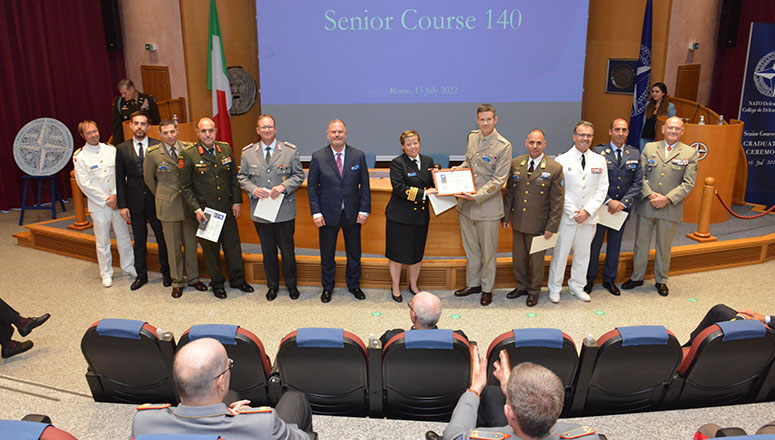 Ambassadors to Rome, Defence AttachÃ©s and distinguished guests were welcomed upon arrival to the NATO Defense College. The NDC Commandant, Lieutenant General Olivier Rittimann, welcomed Admiral RÃ¼hle who then signed the Guest Book, followed by an Office Call with the NDC Commandant.

The NDC Commandant opened the Graduation Ceremony with introductory remarks, reflecting on the âvery successfulâ performance of Course Members âin balancing a challenging academic courseâ. He also highlighted that âpersonal development and team growth are, along with the ability to adapt, what the Senior Course is all about, and what makes this Course and this College more relevant than everâ.

The floor was then given to Admiral RÃ¼hle who congratulated Course Members for completing the Course. He highlighted the longstanding tradition of the NATO Defense College and quoted the vision of the first Supreme Allied Commander Europe, General Eisenhower, who was behind the establishment and mission of the College, stating that it âis even more relevant today, given the significant challenges of a complex security environmentâ which âhas been emphasized throughout the last months.â

Afterwards, the Course President, Colonel Nicolas Andre, and the Course Vice-President, Ms. Annette Klein, delivered a joint Farewell Address in which they emphasized the relevance of NATO and the Courses at the NATO Defense College, particularly considering the change of paradigm witnessed during the time of this particular Senior Course, resulting from Russiaâs attack against Ukraine. They added that the time spent at the NDC will hold a âspecial placeâ in their memories and benefit them in âall vicissitudes of life in the years to comeâ.

The ceremony followed with the announcement of the Course Members who wrote Individual Papers worthy of being published. Then, the winner of the Eisenhower Prize for the best Committee Study Project was awarded to Committee 3.

The Graduation Ceremony concluded with the Conferment of Diplomas to the 75 Course Members, representing 34 NATO and partner nations.