This website uses cookies to ensure we can provide you with the best browsing experience.
x
NDC - News- Russiaâs military after Ukraine: down but not out

Russiaâs military after Ukraine: down but not out 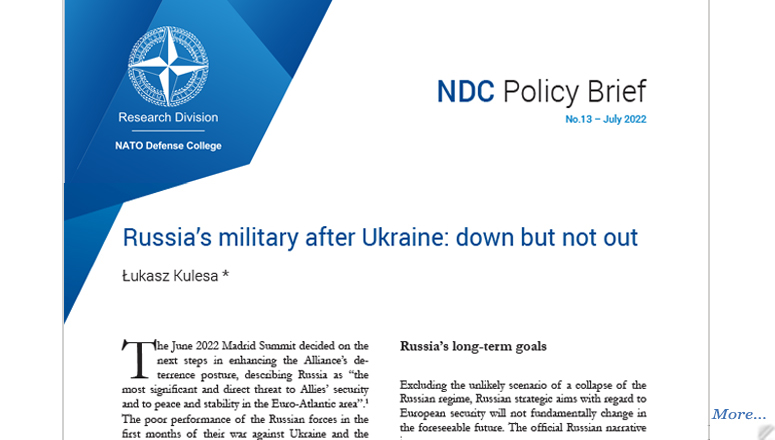 The June 2022 Madrid Summit decided on the next steps in enhancing the Allianceâs deterrence posture, describing Russia as âthe most significant and direct threat to Alliesâ security and to peace and stability in the Euro-Atlantic areaâ.1 The poor performance of the Russian forces in the first months of their war against Ukraine and the scale of casualties and material losses they suffered should however prompt further reflection about Russiaâs ability to recover and challenge NATO militarily. If the Russian military seems unable to prevail over Ukrainian forces (supported by a number of NATO countries), it may reasonably be asked whether unrolling âthe biggest overhaul of our collective defence and deterrence since the end of the Cold Warâ2 is justified.

This Policy Brief argues that NATOâs goals to shore up the Eastern flank are indeed warranted for three reasons â Russiaâs political will to claim a victory, evidence of learning from past mistakes, and the existing Russian industrial capacity. In fact, the Russian military will probably experience a relatively speedy recovery. With the caveat that much is contingent on day-to-day developments and the ultimate outcome of the war, it is also plausible that Russia will âbuild back betterâ rather than simply rebuild a military which has proven to be ill-prepared for the operation against Ukraine.

* (back) Åukasz Kulesa is Deputy Head of Research at the Polish Institute of International Affairs (PISM) and Senior Associate Fellow at the European Leadership Network.
1 (back) NATO 2022 Strategic Concept, paragraph 8.
2 (back) Remarks by NATO Secretary General Jens Stoltenberg and US President Joe Biden at the start of the 2022 NATO Summit, 29 June 2022.