This website uses cookies to ensure we can provide you with the best browsing experience.
x
NDC - News- The unrealized potential of cooperative security in the Arab Gulf

The unrealized potential of cooperative security in the Arab Gulf 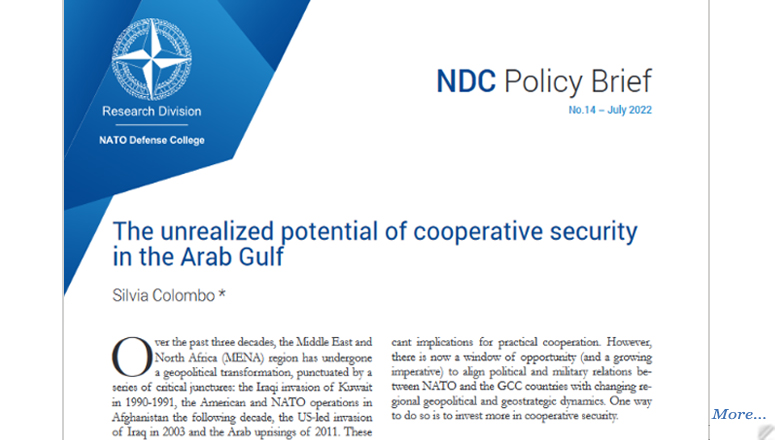 Over the past three decades, the Middle East and North Africa (MENA) region has undergone a geopolitical transformation, punctuated by a series of critical junctures: the Iraqi invasion of Kuwait in 1990-1991, the American and NATO operations in Afghanistan the following decade, the US-led invasion of Iraq in 2003 and the Arab uprisings of 2011. These regional geopolitical shifts â often dictated by domestic drivers â have been accompanied by global geostrategic changes. As a result, the Gulf sub-region, encompassing Gulf Cooperation Council (GCC) countries,1 Iraq, Yemen, and Iran, has emerged as the new center of gravity in the MENA region.

Thus, NATO should give the Gulf sub-region special consideration in its strategy for the South. This sub-region is distinctive and important for NATO for two reasons. First, it plays a key role in global energy geopolitics, a role further reinforced by the fallout of the Ukraine war. Second, the specific security challenges confronting the Gulf sub-region (e.g., terrorism, maritime insecurity and piracy, cyber-attacks and climate change-related threats) are more in line with what NATO can deliver for the security of the area. No other sub-region along the southern flank holds the same potential for NATO. Yet, the current partnership framework, structured around the Istanbul Cooperation Initiative (ICI), has major flaws in terms of format and substance.

* (back) Senior Researcher at the NATO Defense College. The author would like to thank Cinzia Bianco, Ashraf Keshk, Youssef Mnaili, Marc Ozawa, Cynthia Salloum and Thierry Tardy for their feedback on previous drafts.
1 (back) They include Bahrain, Kuwait, Oman, Qatar, Saudi Arabia and the United Arab Emirates (UAE).