This website uses cookies to ensure we can provide you with the best browsing experience.
x
NDC - News- NRCC-28 Field Study to Brussels 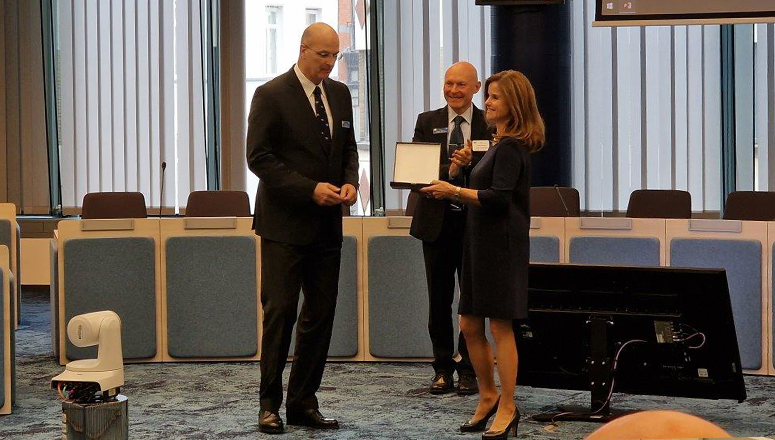 Ms. Kasia Laever, from Domestic and Foreign Affairs (including human rights and disinformation), Security and Defence, European External Action Service (EEAS), made a presentation on “EU Sanctions against Russia”.

Ms. Laevers stated that Russia is the most sanctioned country in the world, the effects of which are strongly impacting Russia in the wake of its invasion of Ukraine. Russia has seen its financial flows cut and visa issuances to its people restricted.

The Russian economy is expected to contract by some 10% and the long-term impact will be heavy. She also highlighted how the EU is responding to human rights and international law violations, and how it is supporting Ukrainian victims of war.

Before ending her session, the briefer answered questions from Course Members, during which she pointed out Russia’s reluctance to engage in diplomatic talks with western countries.

The next presentation was “Energy Policy â How to Tackle the Energy Crisis”, led by Ms. Evelina Harstein, Deputy Head of Unit Communication and Outreach Directorate General for Energy.

Ms. Harstein spoke about EU natural gas import routes and EU dependence on Russia, regarding not only natural gas, but also coal and oil.

The final discussion was on the EU plan to reduce dependency on Russian energy, supported by a communications strategy. The process started on 13 October 2021 and was unveiled on 14 September 2022 with the Commission proposal for the new regulation to reduce energy bills for EU citizens.

Cooperation in energy with North Africa’s countries and price capping on electricity were the most discussed topic during the question and answer session, which concluded the second briefing of the day.

Ms. Nicoletta Pusterla, from EEAS â China, Hong Kong, Macao, Taiwan and Mongolia gave her insights on “EU-China Relations”, during which she remarked how China is considered a global player and a strategic partner of the EU, but also remains a considerable challenge in terms of global carbon emissions.

The EU sees China as a competitor (systemic rival) on the economic front, but has concerns over the respect of human rights and its ambiguous position regarding Russian aggression in Ukraine.

The briefer also gave insights regarding the situation in Taiwan, pointing out the difference between EU policy and US policy on China.

The Q&A session focused on respect of human rights; how the EU approaches China in discussions; EU dependency on certain goods (semiconductors, magnesium, etc.) for which shortages were experienced during COVID-19 pandemic.

The last briefing of the day was on “EU Global Strategy in the Southern Neighborhood”, presented by Ms. Birgit Loeser, Head of Division for MENA Regional Affairs, EEAS.

She began with a discussion on The New Agenda of Mediterranean, a very ambitious economic and investment plan (public and private) for 2021-2027, worth some 30 billion euros for the MENA region countries.

Counter-terrorism was also a topic discussed during the presentation, along with the EU’s response to the terrorist threat, which is one of its priorities in the near future.

She then addressed maritime security in MENA countries and in the North-Western Indian Ocean (NWIO), with an overview of cooperation initiatives. This was followed by questions from Course Members to the briefer, thereby concluding the EU component of the Field Study.