This website uses cookies to ensure we can provide you with the best browsing experience.
x
NDC - News- What can Finland and Sweden learn from the Baltic statesâ defence specialization?

What can Finland and Sweden learn from the Baltic statesâ defence specialization? 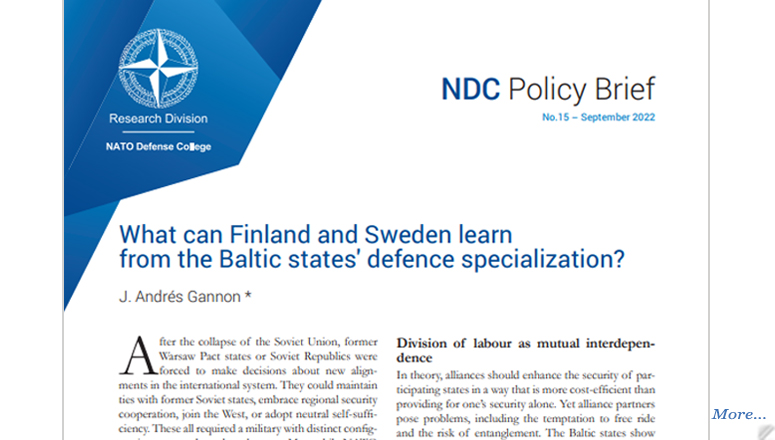 After the collapse of the Soviet Union, former Warsaw Pact states or Soviet Republics were forced to make decisions about new alignments in the international system. They could maintain ties with former Soviet states, embrace regional security cooperation, join the West, or adopt neutral self-sufficiency. These all required a military with distinct configurations, strength, and weaknesses. Meanwhile NATO agreed to extend an olive branch to former Warsaw Pact states on the condition they downsized conventional capabilities and Westernized equipment. While recognizing states emerging from the Soviet Unionâs orbit would need time to rebuild credible defence, from the outset NATO conveyed the expectation that these states contribute to collective defence.

As Sweden and Finland move closer to NATO membership, a familiar concern has emerged: expanding NATOâs responsibilities without augmenting its military capabilities. As with previous rounds of expansion, prospective members are expected to demonstrate their capacity as security producers, not just security consumers. Each possesses important military capabilities that should strengthen the alliance if strategies for integrative defence and operational planning are purposive and harmonized.1 The following examination of NATO expansion to the Baltic states shows that NATO can ensure efficient burden-sharing with new members by encouraging niche specialization that is complementary with the strengths and weaknesses of existing members.

* (back) PhD Eisenhower Defence Fellow, NATO Defense College, from May to July 2022.
1 (back) J. Deni, âSweden and Finland are on their way to NATO membership. Hereâs what needs to happen nextâ, Atlantic Council, August 2022.