This website uses cookies to ensure we can provide you with the best browsing experience.
x
NDC - News- Day 2 of NRCC 28 Field Study to Brussels 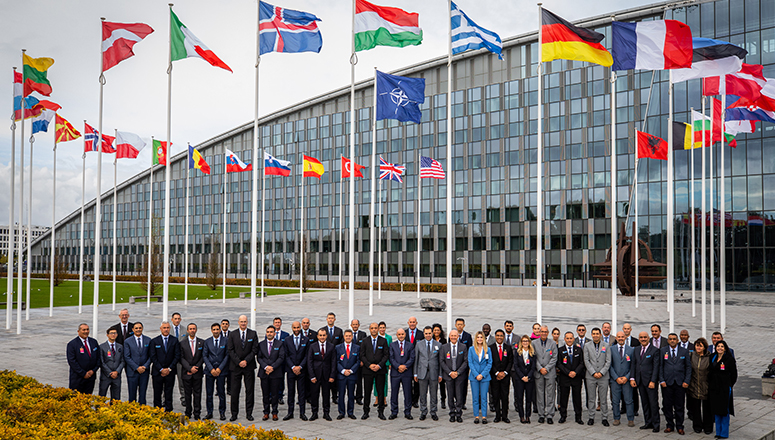 In his remarks, LTGEN Adamczak highlighted the challenges to come in the years ahead, especially after the Russian aggression again Ukraine, even if NATO is currently stronger and more prepared than it was in 2014, following the Russian invasion of Crimea.

The Director General of IMS addressed topics such as the implementation of the NATO 2022 Strategic Concept, main threats for the Alliance, the accession process for Finland and Sweden, terrorism, cyber threats, and climate change.

The briefings session started with a presentation on âNATO Decision-Making Process, its Bodies and the Mediation Mechanism to Reach Consensusâ, led by LTC Petter Bjorgo (Ancien of SC-135), from the Policy and Capabilities Division of the International Military Staff (IMS).

After a short introduction on NATOâs organizational structure, the respective roles of NAC (North Atlantic Council), Military Committee, and other bodies, LTC Bjorgo briefed Course Members on the decision-making process and the importance of consensus: the fruit of consultation and mediation among Allies.

At the end of the presentation, CMs had the possibility to ask questions, which concerned the decision-making process and NATO relations.

The second presentation of the day, entitled âThe Outcomes of the 2022 NATO Summit, including the New Strategic Concept and Enhancing NATOâs Deterrence and Defence Postureâ, was made by LTC Richard Showalter, Policy and Capabilities Division â IMS.

The briefing started with an overview of key takeaways stemming from the recent Madrid Summit, where Allies endorsed the new Strategic Concept. He underscored the importance of this document, in which NATO sets out its strategic vision, values and priorities for the next decade.

Terrorism, rapid response forces, NATO withdrawal from Afghanistan were the most discussed topics during the question and answer session.

Group Captain Rob Dargan, from the Operations and Planning Division â IMS, then gave a briefing on âNATOâs Response to the War in Ukraine and the Support Providedâ, starting with an overview of NATO posture, missions and activities.

He provided insights on the Readiness Action Plan, the composition of response forces, and how they work. He also spoke of NATOâs military presence (Enhanced Forward Presence) in Europe, with a special focus on NATOâs Eastern Flank.

The next topic addressed was the New NATO Force Model (following the Madrid Summit) and Comprehensive Assistance Package (PAC), which put in place for supporting and assisting Ukrainian people.

The briefer underlined how energy security impacts military operations and how important it is to protect energy infrastructure, ensuring energy supply to the military. COL Maroon spoke about how climate change can impact Allied security, stating that NATOâs aim is to become a global leader in climate change. Resilience was the last topic discussed, which was followed by a question and answer session that allowed Course Members to delve further into the various subjects raised.

This concluded the academic programme for NRCC-28âs visit to NATO HQ.