This website uses cookies to ensure we can provide you with the best browsing experience.
x
NDC - News- Senior Course 141 Visits Budapest During Field Study One

From 27 to 28 September 2022, Senior Course 141 visited Budapest as part of its Field Study 1. During the two-day trip to Hungaryâs capital, Course Members were privy to several briefings about the countryâs policies and positions on defence, security and foreign policy. Hungary has been a NATO member since 1999. 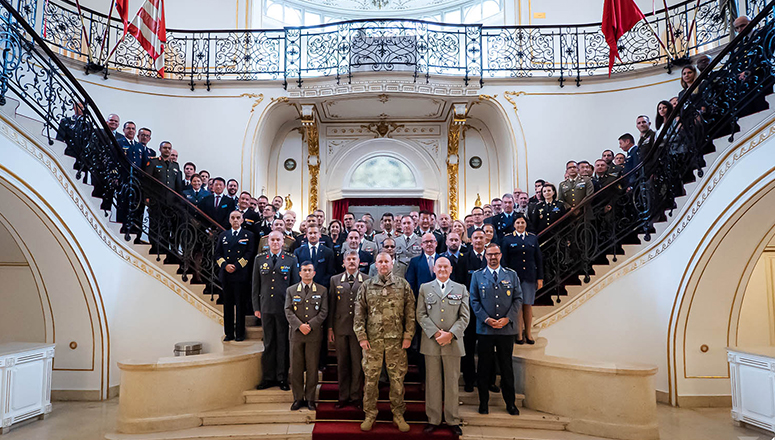 Day 1 of Field Study 1 started at Stefania Palace with an opening speech delivered by the Deputy Chief of Staff Operations of the Hungarian Defence Forces Command, Major General Laszlo Garas â an Ancien of Senior Course 122. He gave Course Members on a historical overview of Hungary, spanning from the origins of the nation to modern times.

Major General Garas then gave the floor to Mr. Zsolt Nemeth, Chair of the Hungarian Parliamentary Committee for Foreign Affairs, who presented the first panel of the day on “Collective Defence of Our Liberty”. The presentation touched upon the current geopolitical situation, and challenges that NATO is facing. He spoke of the relevance of the NATO Innovation Fund, and this was   followed   by a   gift exchange   presented by   Committee 1.

The second presentation was delivered by the State Secretary for Security Policy and Energy Security of the Ministry of Foreign Affairs, Mr. Peter Sztaray, who briefed Course Members on the “Foreign and Security Policy of Hungary”. He addressed the global effects of the Russia-Ukraine war, and Hungary’s position in dealing with such challenges; the crisis on energy prices and energy supplies; the “Global Europe” topic; and the challenges faced in the Western Balkans regarding the European enlargement process. The presentation continued with a discussion on thecurrent situation of several international organisations including NATO, the United Nations, OSCE and the Council of Europe. This was concluded with the topic of “Space” and Hungary’s position in this domain.

The next panel, delivered by the State Secretary for Defence Policy and Defence Development, Mr. GÃ¡spÃ¡r MarÃ³th, centred on “The Perspectives of Hungarian Defence Policy”. Mr MarÃ³th explained the strategic documents that guide Hungarian security and defence policy - the National Security Strategy and the National Military Strategy - and the modernization programme of the Hungarian Defence Forces. Mr. MarÃ³th also emphasized that the framework of Hungarian defence policy thinking is shaped primarily by the country’s membership in NATO and the EU. He summarized the numerous regional and bilateral cooperations Hungary is involved in.

The final lecture was delivered by the Chief of Defence, Lieutenant-General Romulusz Ruszin-Szendi, after an Office Call and gift exchange with the NDC Commandant, Lieutenant-General Olivier Rittimann. Lieutenant General Ruszin-SzendiÂ´s presentation focussed on “The Force Development of the Hungarian Defence Forces”. He delivered a comprehensive briefing on Hungary’s ongoing armed forces development program; the key points of a small country’s defence strategy; and highlighted the country’s main needs in order to maintain capable defence forces.

One of the main purposes of Field Study trips is to gain a better understanding of different countries’ positions through first-hand sources. For Course Member Colonel Terje BruÃ¸ygard, from the Norwegian Army, the lectures were very “eye-opening to see a slightly different view than I have myself and my country has, but this is what I think the Course really offers the students â different viewpoints on complex problems”. Course Member Lieutenant Colonel Diego Jimenez from the Spanish Army added that the presentations gave him “a better understanding of the approach from Hungary and how they perceive their threats and their particular mission of geopolitics”.

In the evening, Course Members returned to Stefania Palace to attend a cultural celebration of traditional Hungarian dance, which was followed by a toast by Mr. Tamas Zsiga, Deputy State Secretary for Human Policy.

Day 2 began with a visit to the Parliament, followed by a scenic bus tour around the city, thus concluding the Hungarian leg of Field Study One.