This website uses cookies to ensure we can provide you with the best browsing experience.
x
NDC - News- Destination Berlin: Senior Course 141 Continues Field Study One

From 29 to 30 September 2022, Senior Course 141 visited Berlin, the third capital of Field Study One that focusses on European Security Perspectives. Course Members attended briefings from several representatives of the Ministry of Defence and the Bundestag. 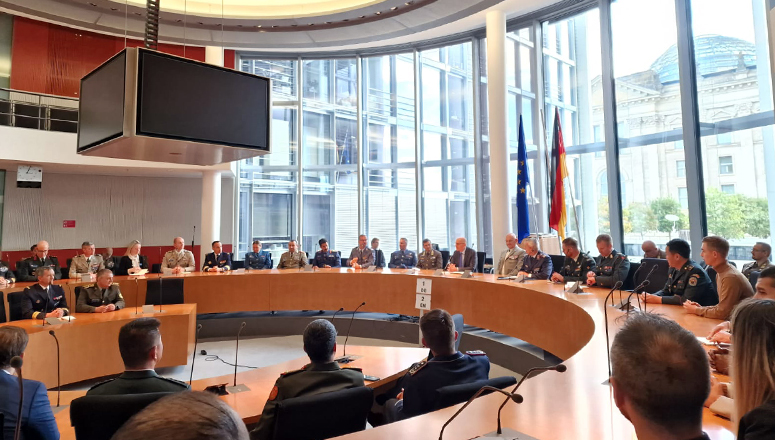 Lieutenant General Kai Ronald Rohrschneider, Director-General for Forces Policy at the Federal Ministry of Defence, welcomed Senior Course 141 to the Federal Ministry of Defence. During his opening remarks, he singled out the value of the Senior Course in preparing Course Members for the future, that âeveryone is specialâ and âbrings something to the tableâ, a core value of the NATO Defense College and the Alliance. He stressed that we are currently living challenging times and that it is important to be prepared to face such challenges in paving the way forward.

The first briefer of the day was Dr Karl-Heinz Kamp, Special Envoy of the Political Director of the Federal Ministry of Defence, and a former Director of the NDC Research Division. During his presentation on âBundeswehr Operations-Overview, Perspectives and Challengesâ, he provided an overview on the main challenges that the world is currently facing - with a special analysis on Germany - and stressed that such challenges can only be tackled through multilateralism. He also spoke at length about Germanyâs fundamental principles and position on defence and security matters, as well as the countryâs role as a reliable partner in NATO and the EU. The presentation was followed by a Q&A session.

The next lecture was delivered by Rear Admiral Wilhelm Thomas Abry, Chief of Division II of the Directorate-General for Strategy and Operations in the Ministry of Defence. His presentation on âBundeswehr Operations-Overview, Perspectives and Challengesâ, delved into the key tasks of the German Armed Forces and Germanyâs geostrategic approach in three main areas: the Euro-Atlantic; Africa and MENA; and the Indo-Pacific. He stressed the importance of cooperation between NATO and the European Union on defence issues and highlighted Germanyâs commitments to strengthen NATOâs deterrence and defence. The lecture concluded with a Q&A session, followed by closing remarks and a gift exchange by Committee 2.

Course Members then attended a short tour of the memorial of the German Armed Forces, a central site for the commemoration of military and civilian Bundeswehr members who lost their lives in service to the Federal Republic of Germany. Course Members then walked to the German Resistance Memorial Center where Professor Dr. Johannes Touchel presented a brief historical overview of the site, beginning from the early 40s until today.

The next stop was the Paul-LÃ¶be-Haus. Course Members were welcomed by Member of the German Bundestag, Peter Beyer, Member of the Foreign Affairs Committee. He delivered a lecture with a special focus on the Russian unprovoked war against Ukraine and its consequences, underscoring how crucial it is to continue support to Ukraine. The lecture was followed by a Q&A session.

The day concluded with a Bavarian-style evening, with opening remarks by Lieutenant-General Kai Ronald Rohrschneider.

On Day 2, Course Members attended a guided bus tour around Berlin and the main historical sites of the city.

Course Member Colonel (GS) Volker Eden, from the German Air Force, stated that the visit to Berlin helped his colleagues from Senior Course 141 to better understand âwhat it meant for Germany be a partner not only in the EU, but also in the Alliance, and that we are really focusing on multilateralism and not only on the German way of doing thingsâ. Indeed, Course Member LTC Ali Al-Maliki from the Iraqi Air Force, said that the visit to Berlin âwas really enlightening in terms of seeing things through the German point of view on NATO defence and the NATO collective approach in strategyâ. He also added that âthe social aspect of the visit was truly culturally enrichingâ.