This website uses cookies to ensure we can provide you with the best browsing experience.
x
NDC - News- Field Study in Morocco for NRCC 28

Field Study in Morocco for NRCC 28

On 29 and 30 September 2022, NATO Regional Cooperation Course 28 visited the Kingdom of Morocco, its last stop on the Field Study itinerary. 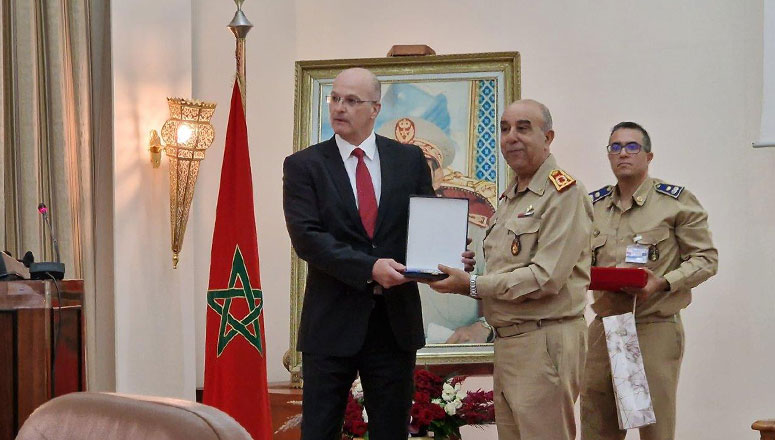 The second country visited as part of the NRCC 28 Field Study was Morocco, one of the seven countries in the Mediterranean area participating in NATO's Mediterranean Dialogue, together with Algeria, Egypt, Israel, Jordan, Mauritania and Tunisia. The Mediterranean Dialogue was initiated in 1994, with the aim of promoting regional security and stability and fostering better mutual understanding.

The delegation was welcomed in the Mess Officers’ Club in Rabat, where Brigadier General Abdelkrim Nejjar, from the General Staff of the Royal Moroccan Armed Forces addressed NRCC 28 after an Office Call with the Head of the NDC delegation, BGEN RenÃ© Leitgen.

In his speech, BGEN Nejjar remarked on the significance of the visit and on the importance of cooperation with NATO, as well as with Mediterranean and sub-Saharan African countries, thereby introducingthe topics to be covered during the subsequent briefings.

The first briefer of the day was Mr Omar Amghar, Head of the EU and Mediterranean Process Directorate at the Moroccan Ministry of Foreign Affairs, who gave a presentation on “Morocco’s Role in Euro-Mediterranean Energy and Maritime Security Cooperation”.

Mr Amghar provided an overview of Morocco’s international relations, highlighting the importance of his country for Africa, and went on to discuss Mediterranean affairs, and especially the very valuable relationships established with other countries in several fields, including tourism, maritime transport and energy.

He then outlined several challenges, i.e. illegal migration, terrorism and international crime, and stressed that Morocco, not least on account of its geographical position, was one of the major players in the Mediterranean.

The question and answer session following the briefing touched upon various issues, such as security and stability, cooperation with EUROPOL and FRONTEX, as well as cooperation and relations with China, which was viewed as a very important partner for Morocco.

Mr. Hassan Boukili, Head of the Greater Maghreb and Arab Maghreb Union (AMU) Directorate at the Moroccan Ministry of Foreign Affairs, gave a presentation on “Morocco’s Foreign Policy in the Sahel and Sub-Saharan Africa”, taking an in-depth look at this topic and explaining that cooperation with the countries concerned is a priority for the Kingdom of Morocco. Fisheries, health, transport and agriculture were just some of the areas in which Morocco has been providing support with a view to further facilitating those countries’ integration in the world economy.

The briefer also described the development of criminal activities in the Sahel and sub-Saharan countries at the hands of terrorist groups and Violent Extremist Organizations (VEOs), recognizing coordination and intelligence sharing among countries as the main aspects to enhance in order to counter this threat.

Questions from Course Members on the situation in Mali, the European contribution to stability in the area and migration policies closed the morning session of the day.

In the afternoon, the NDC delegation travelled to Kenitra, approximately 40 km north of Rabat, where they visited the Royal College of Higher Military Education (CREMS), as the Royal Moroccan Armed Forces’ higher military education institution.

Colonel-Major Taiba, Deputy Director of the CREMS, after an Office Call with BGEN Leitgen, welcomed NRCC 28 and introduced the academic presentations to follow.

Speakers for the session were COL Doukkali and COL Ababou, who briefed the NDC delegation on “Morocco’s Partnership with NATO and Bilateral Cooperation with Major NATO Allies”.

They began by presenting the CREMS, with some background information on its organization, mission, programmes, and an overview of its partnerships with other academic institutions, including the NATO Defense College.

Moving on to cooperation with NATO, the briefers explained that counter terrorism, cyber defence, border security and enhancement of interoperability were some of the areas in which Morocco was engaged in joint work with the Alliance as part of the Mediterranean Dialogue.

At the end of the briefing, the panel was joined by Professor Houdaigui for the question and answer session, which concluded the NRCC 28 visit to the Royal College of Higher Military Education.

The second day in Morocco was centred around the city of Casablanca, where Course Members visited a Moroccan Navy Frigate. On arrival, the NDC delegation was warmly welcomed by the Frigate's crew, who provided insightful information about life on board their ship and about the Royal Moroccan Navy Combat Unit.

In the afternoon, the NDC delegation remained in Casablanca for a visit to the Hassan II Mosque, the largest in Morocco and third largest in the world. This was the final visit in the NRCC 28 Field Study programme.

NRCC 28 Course Members returned to Rome with a wealth of memories and a deeper knowledge and understanding of the countries visited and their institutions.