This website uses cookies to ensure we can provide you with the best browsing experience.
x
NDC - News- The nations of NATO - shaping the Allianceâs relevance and cohesion

The nations of NATO - shaping the Allianceâs relevance and cohesion

New book edited by Thierry Tardy and published by Oxford University Press, with the academic support of the NATO Defense College. 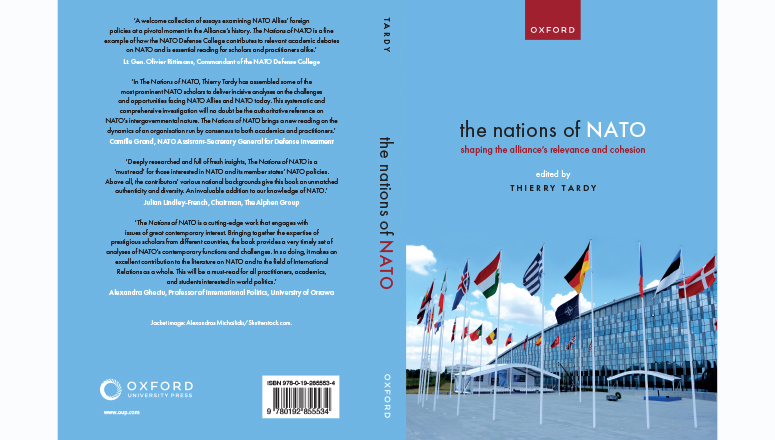 War has returned to Europe, and NATO stands at the forefront of the response to Russiaâs aggression in Ukraine. But how does NATO function? How do NATO member states perceive and act through the Atlantic Alliance? And ultimately how do states shape NATOâs cohesion and relevance in the face of threats?

The Nations of NATO explores national policies within the Atlantic Alliance. It examines the foreign policies of 16 allies, focusing on issues such as their strategic cultures, relationship with the United States, contributions to NATO operations, levels of defence spending, domestic challenges, and decision-making processes. The recent crisis in Ukraine has without doubt reinvigorated NATO as a military alliance, but over the last decade it has also been affected by a number of challenges, both endogenous and exogenous. Whether the Alliance is threatened from the outside (Russia, terrorism, China) or is being undermined from within (intra-Alliance politics, diverging threat perceptions) has become an increasingly debated issue. The degree to which the Alliance can adapt to evolving threats has also been at stake. At the heart of these debates are NATO alliesâ policies, preferences, threat perceptions, and level of commitment to the shared enterprise.

By analysing the drivers, constraints, and specificities of relevant national policies, the volume offers an overview of NATOâs contemporary functions and challenges, and constitutes an important source of data for future research and comparative analysis.


A welcome collection of essays examining NATO Alliesâ foreign policies at a pivotal moment in the Allianceâs history. âThe Nations of NATOâ is a fine example of how the NATO Defense College contributes to relevant academic debates on NATO and is essential reading for scholars and practitioners alike.
Lt. Gen. Olivier Rittimann, Commandant of the NATO Defense College