This website uses cookies to ensure we can provide you with the best browsing experience.
x
NDC - News- Second Stop on Field Study 2 for Senior Course 141: Ottawa

On 4 and 5 November 2022 Senior Course 141 travelled to Ottawa, Canada, as the second capital to be visited as part of Field Study 2, with several briefings focused on Canadaâs security and defence policies, looking at the national and international level. 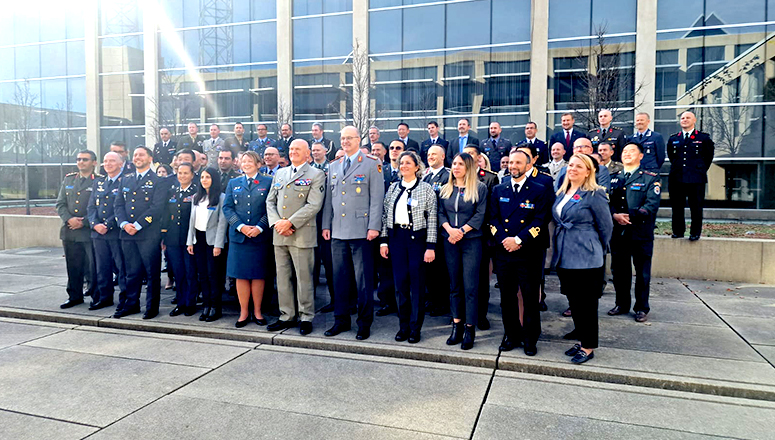 The first presentation of the day was delivered by Ms Alison Grant, Executive Director for Security and Defence Relations at Global Affairs Canada. She talked about the main current and future challenges facing NATO and their consequences, and outlined Canadaâs position regarding those challenges. She underscored that they require global solutions from NATO and Partners and emphasized that although the Allianceâs unity is strong, it âneeds constant maintenanceâ. She further addressed other priorities within the countryâs security policy portfolio, such as Women, Peace and Security; the Arctic region; and the Indo-Pacific. She highlighted that the Alliance remains the cornerstone of Canadaâs defence and security policy.

The second panel was focused on the Arctic region, and composed of Dr Whitney Lackenbauer and Dr Adam Lajeunesse. Dr Lackenbauer briefed Course Members on the different categories of threats involving the Arctic â through threats; threats to the Arctic; and threats in the Arctic â and Dr Lajeunesse addressed the defence policy framework for the Arctic, with a focus on the new maritime threats in the region. He stressed that these threats represent a collective security problem that requires a harmonized response. For Course Member Colonel Geir-Olav Lyngfjell from the Norwegian Air Force, this was an eagerly awaited presentation since both Norway and Canada are Arctic nations and he thought that âit was really interesting to hear Canadaâs views and what they see as challenges, which are quite different from what Norway is focusing onâ.

The next briefer was Brigadier General Laforest, who lectured Course Members on âThe Canadian Armed Forces and National Securityâ, offering an overview of the structure, roles and priorities. He also explained the three pillars of the Canadian vision for security and defence: strong at home, security in the North Atlantic; and engaged in the world.

Afterwards, Jonathan Quinn, Director General of Continental Defence Policy at the Department of National Defence, delivered a briefing on his policy area. He addressed the key current and future trends in the security environment, their impact on Canada and the countryâs work in continental defence. He was followed by Major General Greg Smith, Director General of International Security Policy, who gave a presentation on âThe Canadian Strategic Setting: the Foundations of Canadian Defence Policyâ. He talked about Canadaâs geography and its impact on the countryâs security and defence priorities and concerns; the relationship between Canada and the United States; Canadaâs operations in other geographic areas, such as Africa and the Middle East; and Canadaâs contributions and work within NATO. He concluded the day with closing remarks, thanking the Course Members for their visit.

All presentations were followed by a Q&A session and closing remarks by Course Members from Committee 6.

On the following day, Course Members attended a guided tour of the Canadian War Museum.

Understanding each capitalâs position on defence and security issues is one of the main objectives of Field Study programmes, but Field Studies are also about gaining a better understanding of the visited countriesâ culture, history and society. For Course Member Claudia Di Persio, from the Italian Police, this was the first time she set foot on Canadian soil. She was positively surprised by the strong multicultural aspect of Canadian society, with its openness and ability to integrate people originating from a variety of countries. âMy impression is that people are able to live together, respecting each other without focusing on their differencesâ.

Course Member Colonel Adam Zima, from the Canadian Army, stressed that the Day 1 briefings were âvery accurateâ, judging from his knowledge of Canadian defence and security policy. âWhat we heard was a reinforcement of the fact that Canada will always be thereâ for NATO. He also highlighted that the trip to Canada helped Course Members experience for themselves the long distance separating Canada and the United States from Europe and âtherefore, it provided them with useful context to understand that if we need Canada and the US to reinforce Europe on the Eastern flank, it is a long way and it takes a long time to get there. So, perhaps it also reinforces the need for a strong European pillar while we wait for those forces to arriveâ. He also pointed to an important takeaway from the briefings in Ottawa: âCanada is a committed Ally, and it will continue to be in the futureâ.