This website uses cookies to ensure we can provide you with the best browsing experience.
x
NDC - News- Senior Course 141 visits Norfolk during Field Study 2 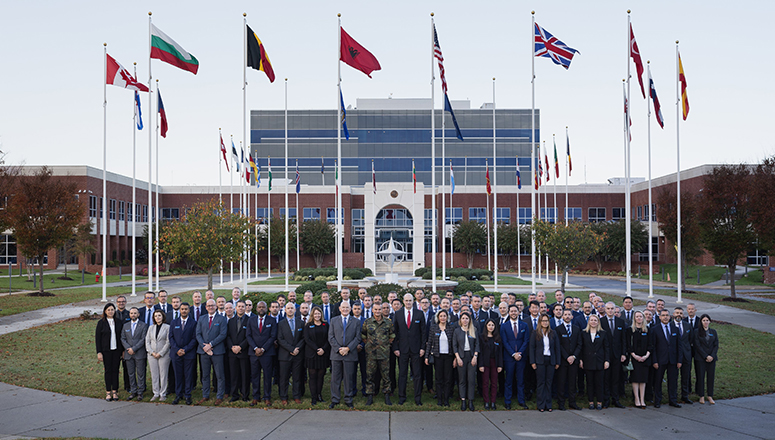 Upon arrival, the Commandant of the NATO Defense College, Lieutenant-General Olivier Rittimann, had an Office Call with the Supreme Allied Commander Transformation (SACT), General Philippe Lavigne.

Afterwards, Captain Periklis Piyis presented the first lecture of the day, on the NATO Warfighting Capstone Concept (NWCC) and the Warfare Development Agenda (WDA). He delivered a comprehensive presentation of the NWCC â NATOâs âNorth Starâ, providing a 20-year vision for the development of the Allianceâs military instrument of power. He then described the WDA and its lines of delivery, which are critical enablers to the NWCC. The presentation was followed by a Q&A session.

The next briefing was delivered by Brigadier General Thorsten Jorgensen, focusing on âCapability Developmentâ. He explained the purpose of the Capability Development Directorate and its major programmes. He also addressed the topics of multi-domain operations and digital transformation. His colleague Eric Pouliquen, Innovation Branch Head, then presented a briefing on innovation as part of the ACT vision. Later, the NDC Commandant had an Office Call with Vice Admiral Guy Robinson, Chief of Staff to the SACT.

Lieutenant Commander Rob Driscoll, Head of Training Analysis and Development at the Joint Force Development Section, then briefed the NDC delegation on âEmerging and Disruptive Technologiesâ (EDTs) and the meaning of these two types of technology to NATO; what they do; significant trends; their war fighting applications; the most potentially dangerous disruptive technologies; and ethical matters for NATO. He concluded his presentation by outlining NATOâs progress and coherence strategy on EDTs.

The last briefing was dedicated to JFC Norfolk (JFCNF), delivered by Rear Admiral FrÃ©dÃ©ric De Rupilly (JFCNF/DCOS Plans), an NDC Ancien. He started by presenting a historical overview of Norfolk and NATO, and went on to describe the operating environment of JFCNF, its main tasks and role as Peacetime Vigilance Manager, and the future plans being drawn for JFCNF. A Q&A session followed.

All briefings were followed by closing remarks delivered by a Course Member from Committee 7.