New York City was the final stop on Field Study 2 for Senior Course 141. On 10 and 11 November 2022, Course Members were taken on a visit to the United Nations Headquarters and the 9/11 Memorial Museum. 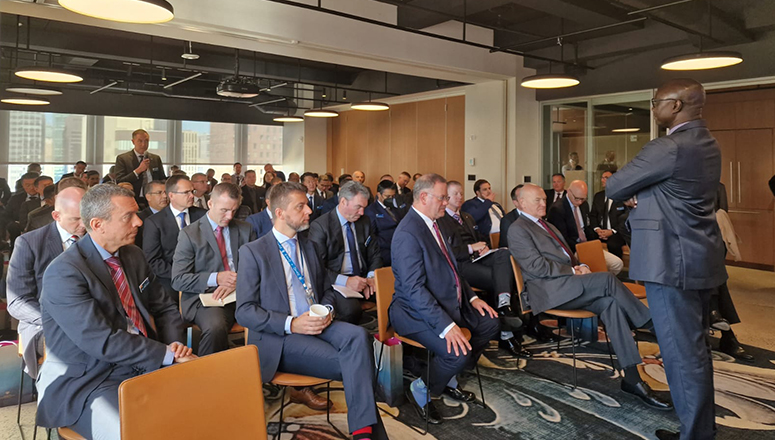 Day 1 started at the Permanent Mission of Norway to the United Nations (UN), where the Senior Course was welcomed by General Birame Diop, Military Adviser to the UNâs Department of Peace Operations (DPO). He presented an overview of the contemporary security context for UN Peacekeeping Operations, addressing the principles and guidelines that govern activities in the field and current challenges affecting peacekeeping operations.

Afterwards, Ambassador Trine Heimerback, Deputy Permanent Representative of Norway to the UN, delivered a briefing on the work conducted by the UN Security Council, with a special focus on the Norwegian perspective â as Norway is currently one of the elected members sitting on the Security Council. She talked about Norwayâs responsibilities within the Security Council and underlined the significant importance to the security of Norway â as a small country â of being part of the UN and NATO, stating her countryâs strong willingness to participate in a multilateral system.

The last briefer was Police Adviser, Mr Jon Christian MÃ¸ller, who presented the âNorwegian perspectives on Peacekeepingâ. He touched upon Norwayâs current UN Peacekeeping Operations deployment and the areas of commitment regarding peacekeeping actions.

All the briefings were followed by a Q&A session and closing remarks from Committee 5. Course Member Lieutenant Colonel Rafael Sanz Rebollo, from the Spanish Air and Space Force, took the view that the visit to the UN was a great opportunity to learn more about UN peacekeeping missions, as well as about the national positions and views of the Norwegian government, âwhich is becoming a very important player with the potential accessions of Sweden and Finland to NATOâ.

After the briefings, Course Members attended a guided tour through the UN Headquarters and met with their respective national delegations in the UN. Course Member Lieutenant Colonel Jacopo Paoli, from the Italian Air Force, remarked that the tour of the United Nations Headquarters had been very interesting, offering a fascinating glimpse into the physical space where nations gather, such as in the General Assembly, and into the workings of the decision-making process.

On day 2 Senior Course 141 visited the 9/11 Memorial Museum, which was the last visit on Field Study 2. Course Member Lieutenant Colonel Rafael Sanz Rebollo saw New York as âthe perfect finaleâ for the Field Study 2 programme â which included visits to Brussels, Ottawa, Norfolk and Washington, D.C. His overall assessment was that Field Study 2 was âa very comprehensive trip in which we not only covered NATO, but also the national postures of Canada and the United Statesâ.