This website uses cookies to ensure we can provide you with the best browsing experience.
x
NDC - News- Towards a deeper NATO-Japan cooperation

Towards a deeper NATO-Japan cooperation 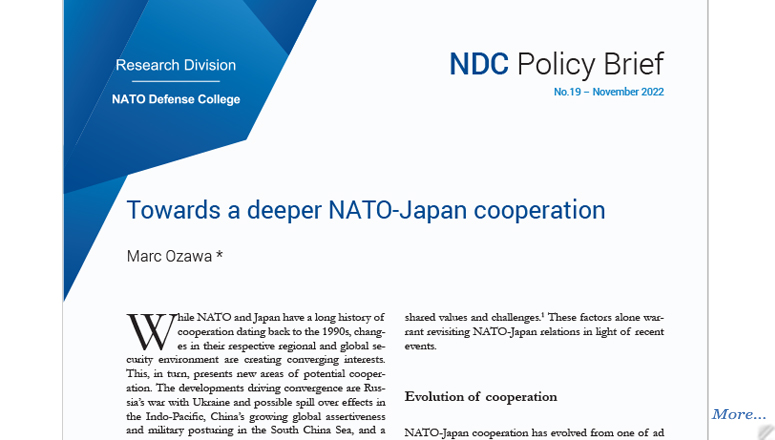 While NATO and Japan have a long history of cooperation dating back to the 1990s, changes in their respective regional and global security environment are creating converging interests. This, in turn, presents new areas of potential cooperation. The developments driving convergence are Russiaâs war with Ukraine and possible spill over effects in the Indo-Pacific, Chinaâs growing global assertiveness and military posturing in the South China Sea, and a deepening security partnership between Russia and China. At the same time, NATOâs view is increasingly global, and Japan has signalled both a willingness and interest to deepen cooperation with NATO, exemplified by Prime Minister Kishidaâs participation in the Madrid Summit last summer. While NATOâs short-term focus will be deterring and defending the Eastern flank, the current timing is right to consider deeper cooperation in the future. This could entail expanding cooperation beyond the âsoftâ areas of humanitarian assistance and non-proliferation into defence through interoperability, cyber, and intelligence. There are already lessons from the Russia-Ukraine war that can assist in laying the groundwork for practical steps to NATO-Japan cooperation including a focused expansion of interoperability of forces, joint exercises in the maritime domain, political support, countering disinformation, and developing contingency plans for logistics and intelligence cooperation in the event of military conflict.

Of all NATOâs partners in the Indo-Pacific, Japan spends the most on defence and represents the largest economy, about three times the size of the Republic of Korea (ROK) or Australia. Japan is the only non-NATO member of the G7, and as the longest-standing NATO partner beyond Europe, Secretary General Jens Stoltenberg described Japan as a ânatural partnerâ with shared values and challenges.1 These factors alone warrant revisiting NATO-Japan relations in light of recent events.