This website uses cookies to ensure we can provide you with the best browsing experience.
x
NDC - News- SC 141 Field Study 3 to TÃ¼rkiye 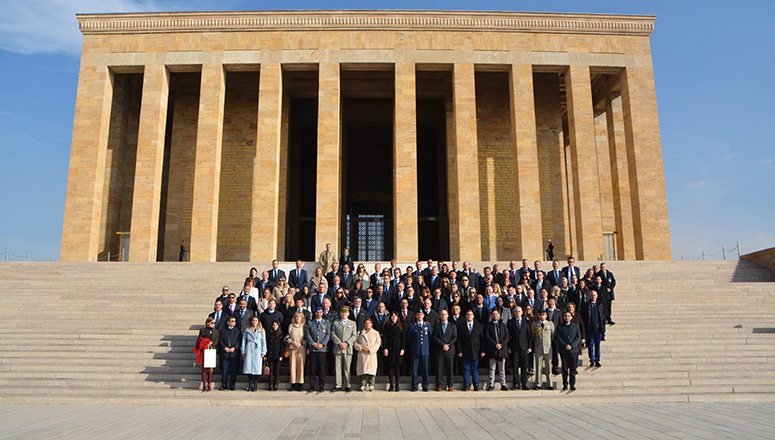 On 6 December 2022, the NATO Defense College delegation began its tour at the Turkish General Staff Headquarters (TGS), where Minister Plenipotentiary Julide Kayihan, Faculty Advisor and Senior National Representative of TÃ¼rkiye at the NDC, welcomed the delegation and introduced the distinguished speakers. The first panel was comprised of BGEN Kubilay KoÅucu, Head of NATO and International Security Department of the Ministry of National Defence, and Ms. AyÃ§a OÅafoÄlu Ä°nam, Acting Deputy Director General, Foreign Policy, Analysis and Coordination of Ministry of Foreign Affairs.

BGEN KoÅucu welcomed the delegation on behalf of the Ministry of Defence (MOD). He then presented the main responsibilities and organizational structure of the MOD. He described TÃ¼rkiyeâs global and regional security outlook and related challenges. BGEN KoÅucu articulated issues from a broad perspective, shared TÃ¼rkiyeâs important contributions in dealing with critical challenges, including countering terrorism; the war in Ukraine; and overall support to the deterrence and defence of the Alliance in a 360 degree perspective. BGEN KoÅucu spoke of how terrorism and groups such as DAESH, FETO, PKK/YPG etc. are affecting the international security situation. He underscored that TÃ¼rkiye is not only countering terrorists, especially in relation to Syria and Iraq, but also providing significant assistance to the local populations through rebuilding projects in Syria (schools, hospitals, mosques, churches, synagogues etc.). BGEN KoÅucu, also delved into TÃ¼rkiyeâs significant contributions in dealing with the refugee crisis.

The next briefer was Ms AyÃ§a OÅafoÄlu Ä°nam, Acting Deputy Director General, Foreign Policy, Analysis and Coordination from the Ministry of Foreign Affairs. She presented the main pillars and priorities of Turkish foreign policy. She examined in detail TÃ¼rkiyeâs position in relation to the war in Ukraine and spoke of the unique support TÃ¼rkiye provided on critical issues such as the grain deal, prisoner exchange, and so forth. The briefer also discussed key elements of Turkish foreign policy, including transatlantic relations and relations with NATO, the EU, the UN, and other multilateral fora. Ms OÅafoÄlu Ä°nam also presented her countryâs broad global diplomatic representation and foreign policy priorities in Africa, Asia-Pacific and Latin America.

An Office Call between the Commandant of NATO Defense College, LGEN Olivier Rittimann and the Deputy Chief of the General Staff, General SelÃ§uk BayraktaoÄlu concluded the first part of the briefings.

Brigadier General Ãzkan UlutaÅ, Director of Strategy at Turkish General Staff Headquarters (TGS), welcomed the NDC delegation of behalf of Chief of Defence (CHOD), before starting his presentation in the second part of the morning session. He presented the mission of the Turkish Armed Forces.

The terrorist threat calls for strong intervention to secure borders and counter possible attacks within the country. He also talked about terrorist threats related to groups such as PKK/KCK â PYD/YPG, FETO (Gulenist Terrorist Organization), DAESH and TÃ¼rkiyeâs ongoing operations against terrorism. For instance, more than 4500 DAESH terrorists have been neutralized so far. BGEN UlutaÅ spoke about stabilization and normalization and underscored TÃ¼rkiyeâs strong efforts in dealing with the Syrian refugee crisis and its support to around 9 million people through various means, including the almost 3.8 million Syrians hosted in TÃ¼rkiye. He analysed TÃ¼rkiyeâs support to NATOâs missions and operations, including TÃ¼rkiyeâs hosting of LANDCOM and multiple significant units, such as Multinational Jointwarfare Centre in Ä°stanbul. He highlighted TÃ¼rkiyeâs role as a significant ally for the last 70 years.

The ensuing Q&A session concluded the academic part of the day.

The NDC delegation then moved to the AtatÃ¼rk Mausoleum (AnÄ±tkabir), and took part in a Wreath Laying Ceremony, where the Commandant of the NDC signed the guest book.

After a kind reception hosted at Gazi Officersâ Club, Course Members visited the Turkish Aerospace Facilities. The Senior Course received an overview of its history and production processes. This was followed by a visit to a helicopter production and assembly site, the closing activity to end the Turkish leg of Field Study 3.