This website uses cookies to ensure we can provide you with the best browsing experience.
x
NDC - News- SC 141 Field Study 3 to Croatia 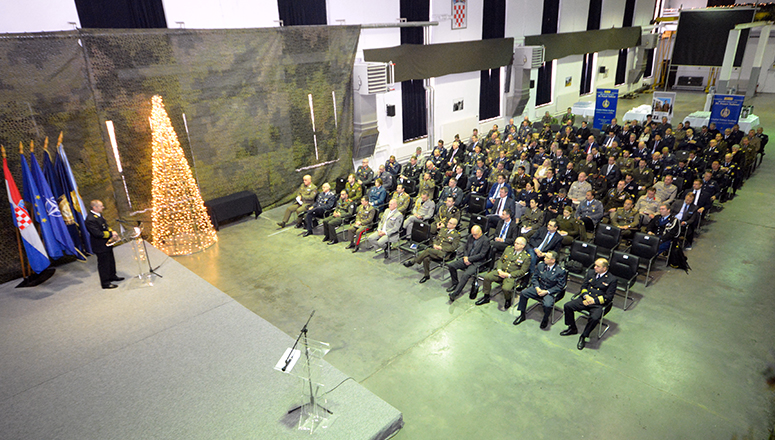 On the evening of December 14, the Chief of the Croatian Armed Forces, Admiral Robert Hranj, extended a warm welcome to the NDC delegation upon their arrival in Croatia.

The following morning on 15 December, the NDC Commandant, LGEN Olivier Rittimann, was hosted by the Minister of Defence, Mario BanoÅ¾iÄ, for an Office Call.

NDC staff and Course Members were given a series of briefings at the Dr. Franjo TuÄman Croatian Military Academy (CDA).

BGEN BlaÅ¾ Beretin, PhD, Deputy Commandant of the CDA, made welcome remarks and then proceeded with a presentation on the Academy, an overview of its mission, organization, structure and partnership activities. Most notably, he spoke of the ambitious project to transform the CDA into the University of Defence and Security.

ADM Hranj remarked how Croatiaâs defence expenditures have been on the rise since 2020 to meet the target of 2% of its GDP. It has begun the transformation process to stand ready for future warfare by investing in new technology, in line with NATOâs new Strategic Concept. He also spoke of the importance of a strong workforce, underscoring that the armed forces need to recruit 110-150 officers annually .

During the Q&A, Course Members asked questions on cyber-attacks and investments in cyber-defence, as well as the situation in Kosovo and Serbia.

At the end of his presentation, ADM Hranj had an Office Call with LGEN Rittimann.

The next briefing was given by Mr Drago Kelemen from the Defence Policy Directorate of the Ministry of Defence, whose presentation was entitled âThe Defense Policy of Croatia with a Review of National Strategic Documents, the EU Strategic Compass and NATOâs Strategic Conceptâ.

Following an overview of the organization, Mr Keleman commented on government priorities for 2020-2024 in security and defence, in terms of investments, projects and homeland security. He then reviewed strategic documents, domestic documents, the NATO Strategic Concept, the EU Strategic Compass. Mr Keleman defined Croatiaâs policy priorities, and how it plans to achieve its strategic goals.

During the Q&A session, CMs focused their questions on cooperation with NATO and the EU, as well as Croatiaâs contribution to NATO and its representation at the NDC.

The following presentation, led by Assistant Professor Gordan Akrap, PhD, from the Hybrid Warfare Research Institute, was entitled âRepublic of Croatia and Malicious Influence Operationsâ. He pointed out how such operations can destabilize normal life, amplify divisions in society, and influence narratives and political processes, thereby exploiting vulnerabilities and insecurities among the population. Professor Akrap then spoke of differences between Russian vectors of attacks and Serbian ones, concluding with a presentation of solutions that can mitigate the impact of those malicious operations.

Col. Marijan PaljeviÄ, PhD, from the Croatian Defence Academy (CDA), gave an overview of Croatiaâs understanding of its own role and position in the regional context. The presentation included a historical storyboard on Croatian and European Geography, followed by a presentation made by Col. Valentina KljuÄariÄ, PhD, also from the CDA, focusing on âCroatiaâs current and future involvement in EU capability building activities within the CSDP/PESCO (Permanent Structured Cooperation) framework, and EU-led Operationsâ. Col. KljuÄariÄ gave a description on PESCO, defining it as a cooperation structure whose main goal is to strengthen defence capacity through joint investment. He spoke of the financial savings that can be made by reducing the number of various armed systems, which should lead to better interoperability. PESCO is currently working on 60 projects, 7 of which are supported by Croatia.

The final part of the morning session focused on the Croatian Defence Industry and was introduced by the State Secretary, Mr Zdravko Jakop, followed by interventions by representatives of the four main companies operating in the military field: âHS Produktâ (weapons producer), âÅ estan-Buschâ (helmets and protection disposals), âDok-Ingâ (special vehicles) and âJelen Professionalâ (military boots). A presentation and showcasing of the equipment concluded the academic session of the day.

Lieutenant General Olivier Rittimann, the NDC Commandant, concluded by personally thanking Croatia for its kind hospitality and the special welcome reserved for the NDC delegation.

Croatia was the last Field Study visit for Senior Course 141.