On 11 April 2013, the Brussels office of the Konrad-Adenauer-Stiftung (KAS) hosted the NATO Defense College (NDC) Research Division and invited guests for a seminar on African Union (AU)-NATO relations. The occasion was designed to launch the NDCâs latest book on the subject for diplomats and policy practitioners resident in Europeâs capital city. 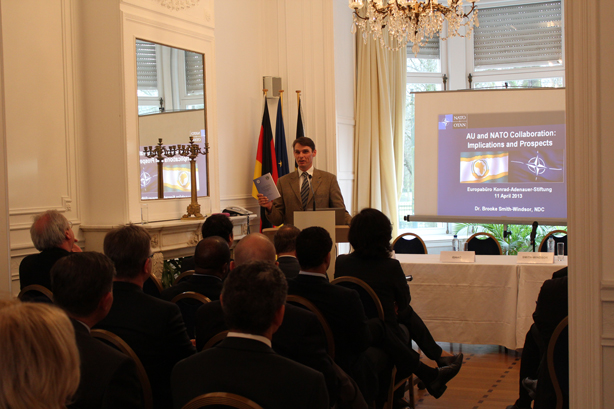 Dr. Stefan Gehrold, Director of KAS Brussels, opened the seminar proceedings by emphasizing the important contributions to African peace and stability that AU-NATO collaboration had made beginning with the African Union Mission in Sudan (AMIS) in 2005. Dr. Brooke Smith-Windsor, Editor of the new NDC publication, followed by providing an overview of AU-NATO relations including the challenges experienced over the 2011 Libyan crisis. He highlighted a number of the proposals made by chapter contributors to move the AU-NATO partnership forward, such as the development of new consultative structures and a strategic framework agreement, clarifying shared operating principles and mutual aspirations. Professor Sally Isaac of Cairo University next offered perspectives on the coordination of Western support to the AUâs peace and security architecture, placing particular emphasis on NATO-European Union (EU) efforts. She concluded by issuing renewed calls for more deliberate NATO-EU coordination, especially at the strategic level, in order to avoid the risk of unnecessary duplication of effort or, at worst, fruitless competition. Dr. Karl-Heinz Kamp, Director NDC Research Division, offered a seminar summation that highlighted the benefits of continued collaboration to both parties in the AU-NATO relationship.

Due to the large number of questions generated, the discussion period was extended to one and a half hours. Questions ranged from, how to involve the African Regional Economic Communities (RECs) in the evolving AU-NATO dynamic, to how to rationalize NATOâs longer-standing partnerships with North African countries under the Mediterranean Dialogue, with its support to pan-Africanism embodied in the AU. The audience of over 45 participants included several African Ambassadors, representatives of the United Nations, European Parliament and European External Action Service, as well as NATO officers and officials up to the level of Deputy Assistant Secretary General. H.E. Martin Erdmann, Permanent Representative of Germany to NATO, congratulated the NDC for bringing greater intellectual clarity and order to the policy issues involved in the AU-NATO partnership through the means of seminars and, especially, through its latest publication.