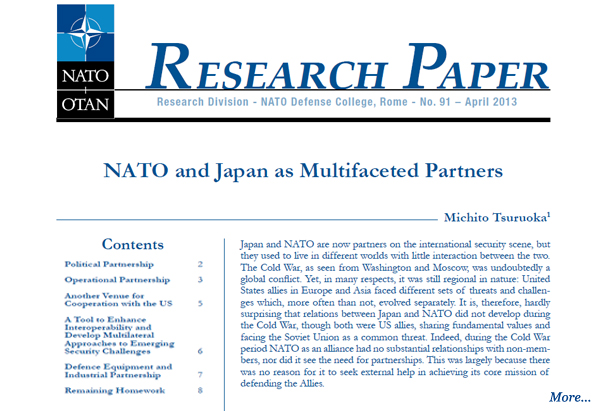 NATO Secretary General Rasmussen is currently visiting Japan to evaluate possibilities for closer cooperation. The partnership between NATO and Japan, which dates back to the early 1990s, was upgraded after the 9/11 terrorist attacks, and Japan has contributed in many ways to NATOâs mission in Afghanistan. Today, cooperation extends to five areas: political partnership; operational partnership; providing another venue for cooperation with the US; interoperability and multilateral action on emerging security challenges; and, finally, defence equipment and industrial cooperation. With the combat mission in Afghanistan coming to an end in 2014, though, key parameters of this partnership are set to change.

The latest paper by the NATO Defense College looks at the various aspects of NATO-Japan relations and develops thoughts on how to further evolve the partnership in a post-2014 security environment.