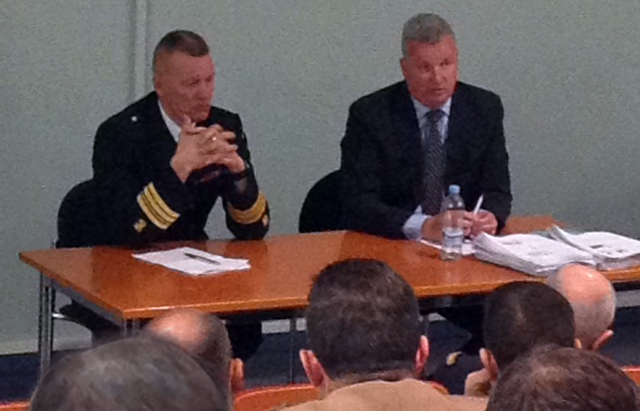 During his welcome speech, Commodore Taipalus explained the background to the strategic outlook of the Finnish Defence Forces, in relation to both historic and geographic factors. He highlighted several specific features of the NDU, explaining that all officer training is conducted jointly and, notably, that it is the only national university in the Nordic region with a doctoral programme in Military Sciences. Finally, he spoke briefly about the ongoing reform of the Finnish Defence Forces, setting the scene for more detailed discussion of the subject later in the day.

Ms Kirsti KAUPPI, Director General for Political Affairs of the Ministry of Foreign Affairs, provided an informative lecture on Finnish foreign and security policy, including key facts about the national economy and about the implications of Finlandâs status as an Arctic nation. Beginning with a historic overview and an introduction to the Finnish system of government, she highlighted the focus on education as a national priority and explained the main features of foreign policy. In this respect, Finnish relations with Russia have progressed from almost no cross-border communication at the height of the Cold War to todayâs figure of over 30 million border crossings per year by Russian people entering Finland for business or tourism. As a member of both the European Union and the Partnership for Peace, Finland defines itself as active in European, regional and global affairs, but militarily non-aligned and independent. As an Arctic nation, Finland prioritizes sustainable coordination of business opportunities with the constraints set by Arctic conditions. After the presentation, the speaker engaged in an extensive question and answer session on a wide range of topics.

Following a light lunch at the NDU mess, the afternoon session provided a more detailed focus on Finnish Defence Forces.

Lieutenant Colonel Sami NURMI, from the Defence Policy Department at the Ministry of Defence, spoke about Finlandâs security and defence policy. The speaker focused on long-term defence planning, international cooperation, and the impact of events in Ukraine. Finland shares a 1,300 km border with Russia, and this has a significant impact on defence planning. Finland considers territorial defence a priority, through a comprehensive security policy and multinational cooperation.

Commander Pasi RANTAKARI, Finnish Defence Forces, provided the final briefing of the day, entitled âFinnish Defence Forces Today and Reformâ. Currently, Finland has a national defence budget of 2.8 billion euros. Finnish Defence Forces are undergoing a fundamental reform process, including structural downsizing and replacement of aging material. The speaker noted that, as in many nations, personnel and equipment replacement costs continue to increase, while budgets are decreasing. Critical decisions are thus needed, to ensure that security planning remains consistent with known funding constraints.

This very rewarding first day of the Field Study concluded with a reception for Course Members and spouses at the NDU mess, hosted by Commodore Taipalus.