This website uses cookies to ensure we can provide you with the best browsing experience.
x
NDC - News- New Research Division Publication: "Player at the sidelines - NATO and the fight against ISIL"

New Research Division Publication: "Player at the sidelines - NATO and the fight against ISIL" 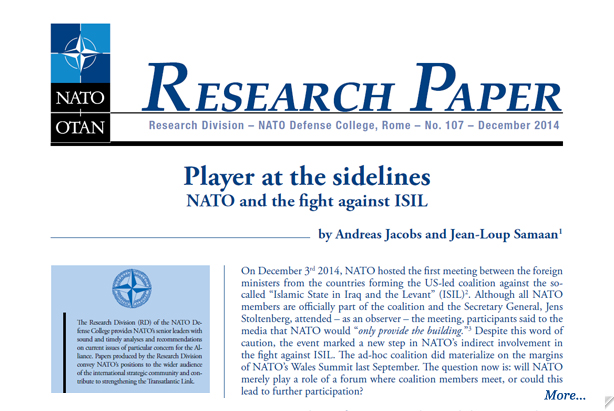 The sweeping advance of the terrorist organization Islamic State in Iraq and the Levant (ISIL) in Syria and Iraq took the international community by surprise. At its summit at the Welsh city of Newport in the United Kingdom on September 5th, NATO found common ground in collectively condemning the organization, and helped in establishing an international coalition against ISIL. However, in Wales NATO neither came up with a collective strategy nor did it define a clear idea of NATO's contribution to the international efforts to degrade and destroy ISIL. Given the diversity of perceptions and interests among NATO member states and the general intervention fatigue this came by no surprise. Nevertheless, standing at the sidelines should not equal fence-sitting. With military and humanitarian action unfolding, there should be a lively debate on what NATO can and should do to support the fight. In that perspective, this paper provides an analysis of the on-going efforts of the coalition against ISIL. It specifies the current domains in which NATO plays a role and it explores three scenarios that could lead to a change in the Allianceâs position on the conflict.