This website uses cookies to ensure we can provide you with the best browsing experience.
x
NDC - News- Defeating the Hybrid Threat 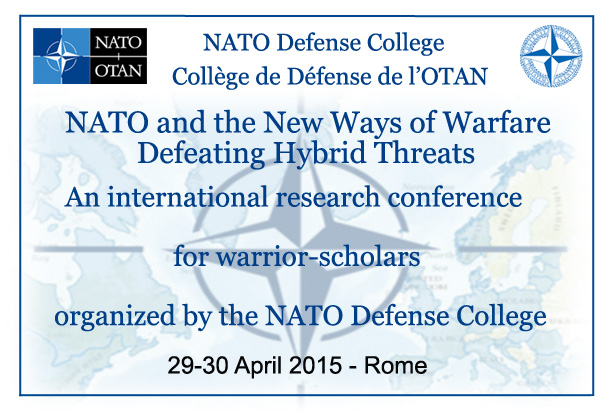 Echoing the Wales Summit Declaration in relation to the hybrid threat, the current Chairman of the US Joint Chiefs of Staff, General Martin Dempsey, has observed that âWe are at â¦ a warfare inflection point; one that eclipses the introduction of nuclear weapons, the introduction of the air domain and the airplane, and the transition from battleship to aircraft carrier.â1 This prophecy was borne out in early 2014 with the emergence of Russian-inspired âhybrid warfareâ on the plains of Eastern Europe. As the North Atlantic Council stated in its 2014 summit declaration, âWe have gathered in Wales at a pivotal moment in Euro-Atlantic security. Russiaâs aggressive actions against Ukraine have fundamentally challenged our vision of a Europe whole, free and at peaceâ¦ We will ensure that NATO is able to effectively address the specific challenges posed by hybrid warfare threats, where a wide range of overt and covert military, paramilitary, and civilian measures are employed in a highly integrated design.â2

The ability of all Allies to understand and respond to this new type of warfare consisting of regular, irregular, and criminal elements operating across real and virtual spaces will be essential to safeguarding the peace and security of the Euro-Atlantic area in the 21st century. NATOâs eastern and southern flanks are equally at risk as recent events in Ukraine and the rise of ISIL underscore.

An essential step in NATOâs campaign to defeat this new hybrid threat is providing its current and future leadersâits soldier-scholarsâwith opportunities for reflection to contemplate the ends, ways, and means that are required in the development of associated strategies. With the benefit of academic freedom, the NATO Defense College (NDC) is uniquely positioned as a forum to do just that: to bring together the Allianceâs senior officers with diplomats and experts to share and build on their knowledge of warfareâs latest inflection point.

The NDC will therefore convene a two-day international research conference of senior Alliance leaders and scholars in Rome from 29-30 April 2015, to address: âNATO and New Ways of Warfare: Defeating Hybrid Threatsâ. Day One will include participation by NDC Senior Course members, the local diplomatic community, and the media. It will serve to clarify the broad political and military dynamics in the international system underpinning this new threat to the Alliance. Day Two will be a closed day for NATO members and invited partners to reflect on strategies across the Allianceâs core tasks as it deals with three central threats: providing deterrence capabilities that simultaneously reassure allies, dealing with aggressive Russian behaviour, and facing the militant Jihadist challenge in the Middle East. Participants will discuss NATOâs responses to these new threats. A summary report will be compiled and distributed to the NATO Military Committee and conference participants following the deliberations.