This website uses cookies to ensure we can provide you with the best browsing experience.
x
NDC - News- Research Report: "After the Paris Attacks - Implications for the Transatlantic Security Debate"

Research Report: "After the Paris Attacks - Implications for the Transatlantic Security Debate" 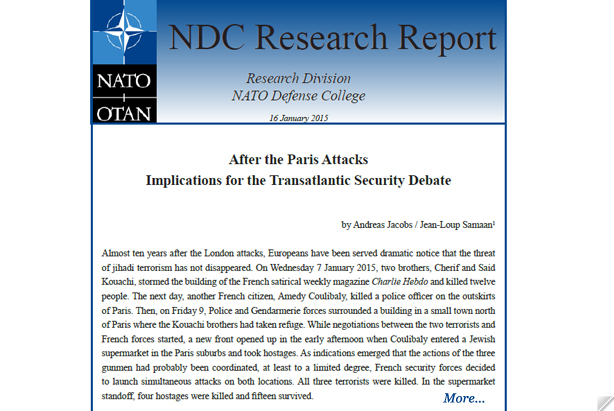 Between January 7th and 9th 2015, two brothers, Cherif and Said Kouachi, stormed the building of the French satirical weekly magazine Charlie Hebdo in Paris and killed twelve people. Over the next two days another French citizen, Amedy Coulibaly, killed a police officer and four customers in a Jewish supermarket.

Many details of the so-called âParis attacksâ remain unclear at the moment. However, the attacks have already triggered a discussion on new jihadist threats and possible counter-terrorism measures in Europe. This debate may soon spill over into a broader and more structured debate on transatlantic security and the role of NATO in fighting jihadi terrorism. In anticipation of such a debate, the new paper by the Research Division identifies patterns and some early strategic lessons emerging from the Paris attacks. Against this backdrop, it gives recommendations for the upcoming debate on a transatlantic strategy against jihadi terrorism.