This website uses cookies to ensure we can provide you with the best browsing experience.
x
NDC - News- New Research Division Publication: "Nuclear Arms Control: Implications from the Crisis in Ukraine" 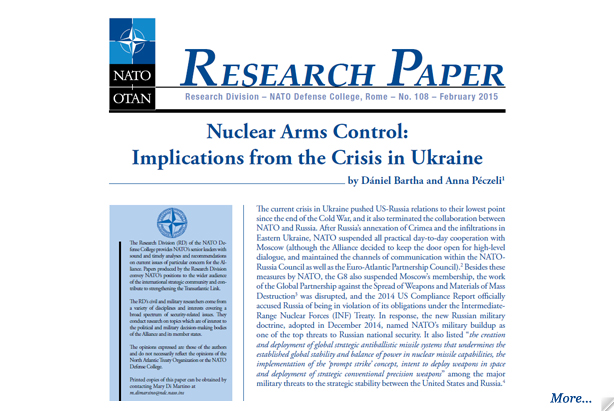 The latest NDC Research Paper shows how the nuclear disarmament agenda and the debate over further reductions of nuclear weapons in Europe have been affected by recent events in Ukraine. The authors point out that the most important consequences of the crisis in terms of nuclear arms control have been âthe dramatically worsened relations between Washington and Moscow, the loss of trust, and the hostile environment which poisons the chances of cooperation. These circumstances are definitely not ideal for further arms control measures and, in many cases, threaten the survival of already existing regimes.â Consequences of these dynamics include âundermined solidarity among the P5 states, the distress of the arms control regime as a whole (especially the NPT and its ability to advance the interests of the non-nuclear weapon states), and the weakened value of great power assurances.â These problems have been escalated by the weakened positions of arms control advocates, and the strengthened arguments of hardliners. Parallel to these events, the United States and Russia both conducted regular nuclear strike exercises in May 2014 which further fueled strategic tensions.

The authors argue that maintaining existing arms control regimes is one of the few options remaining for Washington and Moscow to keep open this important field of cooperation, one which has the potential to provide some level of trust and transparency despite the general decline in U.S. and NATO relations with Russia. This will require a balanced mix of political, diplomatic, economic, and military steps to assist Ukraine and stand up to Russia in such a way that it will be deterred from repeating its actions, but not alienated from future cooperation. These challenges will make arms control harder in the coming years, but that does not mean that the process has lost its viability in the current international security system.