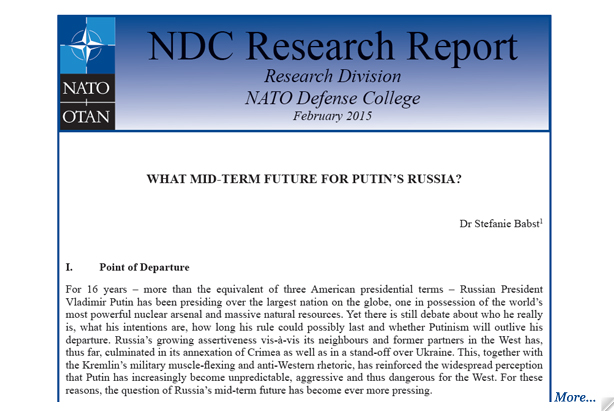 The latest paper by the NDC Research Division raises two questions regarding Russia under President Vladimir Putin, who for 16 years has been presiding over the largest nation on the globe, one in possession of what is arguably the worldâs most powerful nuclear arsenal and massive energy resources. Yet, as the author points out, âthere is still debate about who he really is, what his intentions are, how long his rule could possibly last, and whether Putinism will outlive his departure.â Russiaâs growing assertiveness vis-Ã -vis its neighbours and former partners in the West, its military muscle-flexing, and its anti-Western rhetoric have reinforced the widespread perception that Putin has increasingly become unpredictable, aggressive and thus dangerous for the West. For these reasons, the question of Russiaâs mid-term future has become ever more pressing.

This assessment focuses on three questions. First, following Moscowâs annexation of Crimea and destabilizing actions in Ukraine, how stable is the current Russian political regime? Second, in light of Western economic sanctions against Russia, which are the most important challenges that the Muscovite leadership has to cope with in the socio-economic domain? And third, will these challenges affect Putinâs ability to remain in power?

The authorâs goal in this analysis is to help Western analysts create a plausible scenario for Russiaâs mid-term future, which may prove valuable for political decision-makers who are contemplating how to frame the Westâs future engagement with Russia.