This website uses cookies to ensure we can provide you with the best browsing experience.
x
NDC - News- NATO and the New Ways of Warfare - <em>Defeating Hybrid Threats</em>

NATO and the New Ways of Warfare - Defeating Hybrid Threats

The conference entitled “NATO and the New Ways of Warfare: Defeating Hybrid Threats” represents a fundamental milestone for the NATO Defense College and the Alliance. 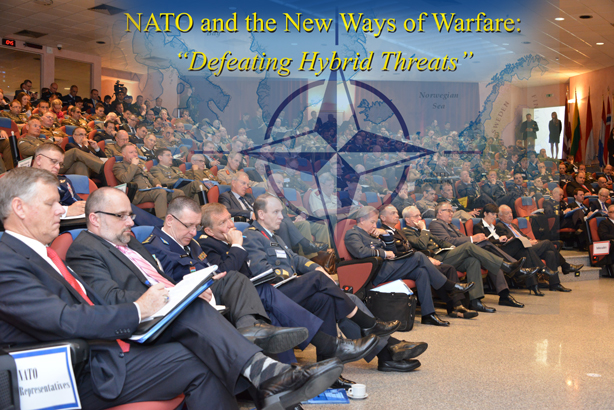 The Russian-Ukrainian conflict on the Eastern border of Ukraine has had a direct impact, not only on the countries concerned, but also on the entire international community. NATO has taken a central role in trying to identify concrete solutions to bring back peace between the two countries. The conflict has been further complicated by the use of ‘hybrid warfare’ tactics â the mix of military and non-military, conventional and irregular components, including cyber and information operations â characterizing one of the most complex issues the international community has had to deal with. Thus, finding the way to address hybrid warfare can ultimately mean finding the route to a permanent ceasefire.

The NATO Defense College, as the prime educational institution of the Alliance, organized the “NATO and the New Ways of Warfare” conference to bring about a better understanding of this crucial subject.

On 28 April 2015, H.E. Tomasz ORŁOWSKI (POL), Ambassador Extraordinary and Plenipotentiary to Italy and the Republic of San Marino, gave the opening remarks, underlining the importance of the conference for a more detailed appreciation of the hybrid warfare scenario.

Later at Palazzo Taverna, H.E. Thomas GREMINGER (CHE), Ambassador and Former Chairman, Permanent Council of the Organization for Security Cooperation in Europe, delivered the keynote address, after brief remarks by the Chief of the Czech General Staff General Petr PAVEL, who has been named as the next Chairman of NATO’s Military Committee.

The second and final day of the conference opened with presentations on “The Alliance and Managing the Hybrid Challenge”, moderated by Dr Jeffrey LARSEN (USA), Conference Chair and Director of Research, NATO Defense College. The speakers were Major General Gordon DAVIS (USA), Deputy Chief of Staff Operations and Intelligence, SHAPE; and Dr Mel McNulty, Head of Politics, UK Joint Delegation to NATO.

A detailed conference report will soon be available on the NDC website.