This website uses cookies to ensure we can provide you with the best browsing experience.
x
NDC - News- New Research Division Publication: Threat Perception in Central Asia in Response to Russia-Ukraine: Kazakhstan Will Not Be Next

New Research Division Publication: Threat Perception in Central Asia in Response to Russia-Ukraine: Kazakhstan Will Not Be Next 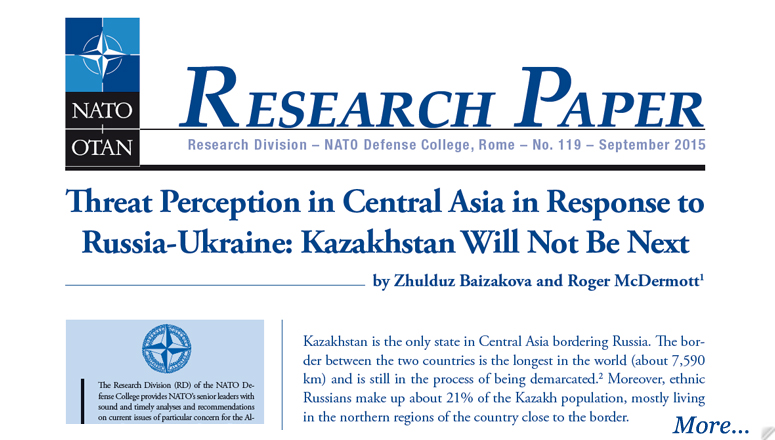 Dear Reader,
Kazakhstan is the only state in Central Asia bordering Russia. The border between the two countries is the longest in the world and still in the process of being demarcated. Moreover, ethnic Russians make up about 21% of the Kazakh population, mostly living in the northern regions of the country close to the border with Russia.

Our authors, both experts on the region, ask whether this proximity should be seen as a risk factor, perhaps offering an opportunity for Moscow to repeat in Central Asia what it has been doing in Ukraine. Many Western policy-makers and authoritative experts believe that this might be the case, and that Kazakhstan is indeed at risk of suffering from Russian aggression. However, Kazakhstan has actually shown over the years that it is fully able to protect its interests in complicated geopolitical scenarios involving its neighbours (especially Russia).

This paper examines the potential for Russia to repeat in Central Asia what it has done in Ukraine, and explores several possible impediments to such a course of action. Given Russiaâs security operations in North Caucasus, and its ongoing operations in Ukraine, the authors believe that it is beyond the Russian stateâs capacity to open a âthird frontâ elsewhere, especially in Central Asia, since Moscow has real security concerns shared by its partners in the region concerning potential instability as a result of transnational or region-wide threats emanating from Afghanistan.

The authors conclude that Central Asian governments in general have reacted with caution to the crisis in Ukraine. Far from seeing Russia as a possible threat to their sovereignty, these governments have been more concerned about the possible impact on their economies stemming from the sanctions regime against Russia. However, a number of factors at play in Central Asia act as inhibitors to the emergence of a âRussia threatâ to the territorial integrity of these states. Relations between Kazakhstan and Russia form the bedrock of Russiaâs foreign and security policy in the region. Western policy-makers could benefit from a deeper understanding of the relationship between Astana and Moscow. Such knowledge could possibly reveal a potential future role for Kazakhstan as a bridge to ease tensions and defuse possible risks of confrontation and escalation.

We hope you enjoy reading about this large and important, but little-known, NATO partner.
Regards,
Jeff